It is possible to get very confused when dealing with technical language, especially in topics we are not conversant with. These two accessories are confused a lot. Are they the same?

The Rj45 and Cat5 are accessories used in Ethernet connections. They are terms that are very commonly mentioned, and the confusing bit is that they are mentioned alongside one another. But are they the same thing? Are they comparable?

The answer is no. The Cat5 is an Ethernet cable that transmits data in the form of electromagnetic impulses from a router to a device such as a computer. It may measure anything between 30 meters to 220 meters.

On the other hand, the Rj45 is a small device that acts as a connector. It is used to connect the Ethernet cable to a source of network. It is actually quite small, measuring approximately 11.6 mm in diameter.

Here is a brief breakdown of the Rj45 connector and Cat5 Ethernet cable’s characteristics.

What are the differences between the Rj45 and Cat5 Ethernet Cable?

The Rj45 vs. Cat5 Ethernet Cable – How do they compare?

The Rj45 is a device that has a long rectangular shape. It usually has a diameter of 11.6mm. It comes with slots through which Ethernet cables wires go through so that they are connected to the source of internet.

This connector is usually transparent, allowing you to see the pattern followed by the wires.

The Cat5 is a long cable that has copper wires inside. They are normally 8 in number. These wires are covered in pvc coating to prevent them from coming into direct contact. They are then twisted in twos and covered with a flexible pvc shield. It can measure anything between 30 and 220 meters.

The Rj45 is actually a connector. This small device connects the Ethernet cable to the source of network. It comes with a configuration which is ideally the pattern followed by the wires. It has an 8P8C configuration, meaning that it has 8 positions and 8 connection points.

The Cat5 Ethernet cable transmits data from network sources such as routers to computers. It has a maximum transmission speed of 10/100Mbps and a bandwidth of 100Mhz. It uses copper wires for the transmission. 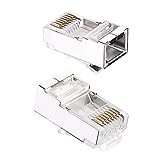 This is a small device that acts as the link between Ethernet cables and network sources such as modems. It has a diameter of 11.6mm. It is a rectangular piece of plastic that has an 8P8C configuration, meaning that it has the capacity to hold 8 copper wires at a go. It has 8 copper pins that are gold coated to prevent them from rusting. The crimps are responsible for data transmission. 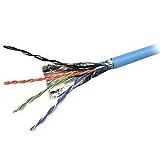 This cable is used to transmit data in the form of electromagnetic impulses from network sources to the computer. It uses copper wires for this function, and they are usually 8 in number. It has a maximum transmission speed of 10/100Mbps and a maximum bandwidth of 100MHz. It is old technology that is now considered obsolete.

These two devices have different functions when it comes to data transmission. There is, however, no doubt that they are both equally important.

No, it cannot. The Rj11 is much smaller and can only support a maximum of 4 wires at a time.

It has a maximum transmission speed of 10Gbps.

Ubiquiti Amplifi HD vs. Google Nest Wi-Fi – Which one is...

Google Wi-Fi vs. Netgear Nighthawk X6 – Is the upgrade worth...

Google Wi-Fi vs. Netgear Nighthawk AC1750 – How do they differ?

Google Wi-Fi vs. Apple Airport Extreme – Which router is better...

Google Nest Wi-Fi vs. Netgear Nighthawk MK62 – Which one is...

Asus Lyra vs. Asus Lyra Trio – Which of these makes...

Asus Lyra Trio vs. Google Wi-Fi – Which router is better...

Asus Blue Cave vs. Google Wi-Fi – Which one is better?

Ubiquiti Amplifi HD vs. Google Nest Wi-Fi – Which one is...