The 802.11ac and 802.11n are a set of WiFi standards that indicate the strength or capacity of the network. They both support high speed internet transfer, but they are different. So which one of the two is better?

When choosing a transmission device such as a router for your home use, it is imperative that you know what kind of WiFi standard it uses, and the efficiency with which it is going to serve you depending on the size of your home and the number of devices you use at any one given time.

The 802.11ac and 802.11n are two WiFi standards that have been around for a while, and they have been useful in both home and office connections. So which one of the two is a better standard, and which one should you use in your home connection?

Come along to find out.

The 802.11 ac WiFi standard is one of the best currently, and it is able to support devices that are WiFi 5 enabled. For this reason, it boasts internet speeds that reach up to 1.3 GBps. Such a speed is quite fast, especially for small routers that transmit data to small and average size houses. Routers that use this standard usually have 2 to 4 antennas that are excellent for boosting the speed and range of internet transmission.

The 802.11n WiFi standard comes in as a slower internet transmitter that is ideally meant for small spaces. It has speeds that are three times less than those of the 802.11ac. This standard averages at 400 Mbps which is quite low as compared to the 802.11ac which came as its improvement.

The 802.11 standard stands out as a much faster standard, and its speed stands at 1.3Gbps

The 802.11ac WiFi standard is able to maintain high speeds over a wide range. Being an improvement of the 802.11n, it can comfortably transmit at twice as much speed within the same range. It transmits at about 400Mbps within a range of 75 feet. It is an ideal standard for spaces that are about 1500 square feet.

The 802.11n is able to transmit at higher speeds over short ranges. When compared to the 802.11ac, it transmits at an average speed of 200Mbps within a 75 feet range.

The 802.11ac is the better standard when it comes to range due to its ability to transmit faster speeds within the same range as the 802.11n.

When it comes to the number of persons or devices connected to the 802.11ac, a total of up to 50 devices can use this WiFi standard at the same time. This standard is strong enough to accommodate such a number without experiencing down time or dead zones. On this standard, it is possible to transmit 4K streaming to several devices at a go.

The 802.11n standard has the capacity to accommodate an approximate 30 to 40 persons or devices at ago. An increase in this number may lead to low speeds and lots of dead zones.

The 802.11ac stands out as the better standard in this regard due to its ability to accommodate more devices.

This WiFi standard is quite fast and can sustain heavy data usage in wide range spaces. It is also referred to as the WiFi 5 standard and it is currently the second fastest after the WiFi 6 (802.11ax) standard.

It reaches speeds of up to 1.3Gbps which is pretty decent for medium sized homes. As far as range goes, it can transmit at speeds of up to 400Mbps within a 75 feet radius. It is in a position to accommodate up to 50 devices at a go without downtime or dead zones.

This standard is also known as the WiFi 4. It is ideal for single person use and small homes that do not demand too much internet use. It supports speeds of up to 400Mbps, but can only sustain this within short ranges. When it comes to range, it transmits at 200Mbps at a 75 feet radius and it can support 30 – 40 devices at a time. 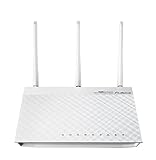 This router is a dual-band device that transmits from two bandwidths. A 2.4GHz bandwidth works alongside a 5GHz bandwidth to transmit at 450Mbps. It comes with 4 LAN ports and 2 USB ports. It comes with a mobile app that you can download and use to install and control this device.

The Netgear N600 is an excellent router for small spaces, and it has better speeds than the Asus RT-N66W. This router also operates on 2 bandwidths that together transmit at 600Mbps. It comes with an app for easy installation and control. It has a protection software that keeps it from being affected by cyber threats and attacks. It, however, does not support Ethernet connections.

The 802.11ac is the winning standard in this comparison since it outdoes the 802.11n in all respects. It boasts faster speeds, a wider range and the ability to support more devices at the same time.

Yes, this WiFi standard can be used to issue voice commands to Alexa.

It is possible to use it, but if you consume heavy internet and use many devices at the same time, it may not be a good fit.