Each of these routers has a distinct strength and a distinct weakness, but all 4 of them are excellent for home transmissions. However, there can only be one winner in a detailed comparison.

The Google Wi-Fi, Amazon Eero Pro, Netgear Orbi AC2200 and Linksys Velop AC2200 are all mesh routers, and devices that operate in this way are highly reliable where speed and transmission range are involved. Picking the best of these 4 routers can be a difficult task, so we decided to test each one out to see which one would perform best.

What are the differences between the Google Wi-Fi, Amazon Eero Pro, Netgear Orbi AC2200 and Linksys Velop AC2200?

These routers bear features that are as similar as they are diverse. The Google Wi-Fi is a compact device that has an interesting cylindrical shape. This look is made more intriguing by a clever LED light that runs its entire circumference in the middle section. To install it, all you have to do is set it on a flat surface since it has a flat base.

The Amazon Eero Pro is actually the smallest of the pack. Its compact nature makes it an easy to install device even where space is a problem. It has a square-like shape, but its edges are rounded off to a smooth finish.

The Netgear Orbi AC2200 is the widest router of all 4. It stands quite tall but sits on a flat base. If you made a cross-sectional cut of the router, you would come up with an oval-shaped piece. At the top, this router is fitted with an LED light that makes for a spectacle in the dark.

At first glance, the Linksys Velop AC2200 strikes you as a simple router, bearing a tall rectangular shape. Among all 4, it stands tallest, and the fact that its base is not wide makes it easy to install, especially where space is an issue.

We really like the Google Wi-Fi’s compact cylindrical shape and beautiful LED light. These features make it a better looking router than the Amazon Eero Pro, Netgear Orbi AC2200 and the Linksys Velop.

In comparison, the Amazon Eero is able to cover the best range at 5,500 square feet which is similar to the Linksys Velop AC2200. However, it registers the lowest speeds of all 4, clocking in at 1Gbps combined throughput. On the other hand, the Google Wi-Fi covers the shortest range at 1,500 square feet and does a slightly better job than the Amazon Eero Pro with its speed reaching maximum throughput at 1,200Mbps.

The Netgear Orbi AC2200 offers one LAN port more than the Google Wi-Fi, Linksys Velop AC2200 and the Amazon Eero Pro, making it the best router.

This compact yet beautiful router makes for an excellent mesh device for medium sized homes. As a dual band router, it transmits speed from two bands with a 2.4GHz band delivering 400Mbps and a 5GHz band transmitting 867Mbps. For easy control, this router comes with a mobile app from which you can run the device from wherever you are.It also comes with many performance enhancing features like beamforming, MI-MUMO support and parental controls.

As a mesh router, this device boasts an incredible level of reliability where range is concerned. However, it transmits relatively low speeds, delivering 240Mbps from a 2.4GHz band and 600Mbps from a 5GHz band. With this router, your information stays secure since it uses high levels of encryption. It also comes with such features as pausing the internet, especially as a parental control and streaming on multiple devices.

With its high speeds and wide coverage, it is no wonder that this router is a family favorite. With this device, it is possible to connect up to 50 devices at a time without experiencing a lot of downtime and dead spots. It also supports MI-MUMO technology, beamforming, parental controls and guest network management. 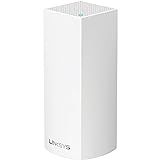 What sets this router apart from the rest is its ability to transmit at high speeds and cover a really wide range. Being a mesh router, it is able to transmit internet to all corners of the home with ease. Unlike the other three in this article, this router is a tri-band device, delivering 400Mbps from a 2.4GHz band and 867Mbps from 2 5GHz bands. Its most impressive feature is the Auto-fix that allows nodes to step up their transmission when one is removed.

We really fancy that the Linksys Velop AC2200 transmits the highest speeds, covers a wide range and comes with Auto-fix. These features are what make it a better router than the Google Wi-Fi, Amazon Eero Pro and Netgear Orbi AC2200.

Yes, this router is compatible with Alexa.

Even though it is not specifically made to be a gaming router, the Netgear Orbi AC2200 does a decent job at supporting gaming.