These cameras are made to be used in indoor and outdoor settings, but they bear quite a number of differences, ranging from their physical build right to their mode of operation. So, which one of the two is a better camera?

In the current technologies market, there are many devices that bear the capability to handle high resolution surveillance. Ubiquiti is a company that has been around a good while, and they are known for creating some of the best and most competitive gadgets globally. The Ubiquiti Unifi UVC-G3 Bullet Camera and Ubiquiti Unifi UVC-G3 FLEX are surveillance cameras made for indoor and outdoor environments. They are known for their ability to capture high resolution footage and their versatility. Below is a detailed comparison of the two.

Ubiquiti Unifi UVC-G3 Bullet Camera vs. UVC-G3 FLEX– How do they compare?

Surveillance cameras come in different shapes, sizes and designs. Some are identified as dome cameras, infrared cameras, PTZ cameras and several others. The Ubiquiti Unifi UVC-G3 Bullet Camera, as the name suggests, is a bullet surveillance camera. It is made to work within buildings and in outdoor environments as well. When it comes to installation, it can be set up on a wall, a ceiling or even a pole depending on the user’s preference. It is an average sized device that can easily go into tight spaces without a problem. The outer body is created using a mix of rigid plastic and die-cast aluminum which, aside from giving it a good deal of longevity, also make it resistant to extreme temperatures during hot and cold seasons.

On the other hand, the Ubiquiti Unifi UVC-G3 Flex is a mini turret camera that is quite versatile in its application setting. Owing to its shape and design, it can be set up on flat surfaces such as a table, desk or bookshelf, and it can also go up on a wall, ceiling or pole. Just like its counterpart, this device works just as well in outdoor settings as it does in indoor settings. The outer casing is made using rigid plastic that is weather resistant, allowing it to withstand extremely hot and cold temperatures with ease. Additionally, it performs just as well in highly humid environments without sustaining much damage.

When it comes to video quality, each of these devices does an exceptional job. The Ubiquiti Unifi UVC-G3 Bullet Camera is a high resolution device that presents a 1080p (1920 x 1080) resolution. This allows for impressively clear videos during surveillance. Additionally, it comes with a Day and Night Mode, boasting IR LEDs that bear a Mechanical IR Cut Filter for incredible night clarity. With this feature, you can be certain that all videos captured will bear an incredible level of clarity. Additionally, this camera boasts a 30 Frames per Second frame rate for real time capture to ensure full coverage.

The Ubiquiti Unifi UVC-G3 Flex, even though quite small, is also an incredible performer as far as video clarity goes. With a 1080p resolution, it is able to capture highly clear videos at all times. Just like the UVC-G3 Bullet Camera, it also supports day and night mode, delivering Integrated IR LEDs for good clarity in the night. This surveillance device also presents a 25 Frames per Second frame rate for timely coverage.

The Ubiquiti Unifi UVC-G3 Bullet Camera uses an 802.3af PoE for power. For this, you will need an 802.3af switch. In case this switch is not readily available to you, you can use a 24V passive PoE as an alternative. On the camera’s underside is a 10/100 ethernet port that supports wired connectivity, and as an added advantage, this device is also Wi-Fi enabled.

On a similar note, the Ubiquiti Unifi UVC-G3 Flex is also dependent on the 802.3af PoE for power. However, this device does not come with any powering alternatives. For connectivity, this device is also fitted with a 10/100 ethernet cable. Just like its counterpart, it is a Wi-Fi enabled device for easy management.

It supports a UniFi Video 3.8 video version and it is also compatible with newer ones. For video editing, it comes with multiple image settings which include contrast, saturation, brightness, 50/60 Hz flicker reduction and sharpness. For sound, it is fitted with an in-built microphone which also supports noise reduction.

Many users find it extremely easy to install, and it bears a ball joint mount which is adjustable. Its 3-axis adjustment angles ensure that you get the best field of view at all times whenever it is running. 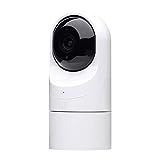 What stands out the most about this little device is its versatility, particularly regarding its setup. It can it comfortably on a flat surface such as a desk, or be mounted up a wall, ceiling or even pole. Even though it is quite small, it supports high quality imaging, delivering an impressive 1080p resolution.

In addition to this, it comes with a 25 Frames per Second frame rate to high quality pictures. For an angle of view, it presents an80° (H), 92° (D),46° (V) orientation. This is observed after lens correction. As with many Ubiquiti security cameras, this version comes with several image settings which include contrast, brightness, saturation, sharpness and 50/60 Hz flicker reduction.

For sound, it comes with a microphone that also bears the capacity to support noise reduction. When it comes to the Unifi Video version, this camera is able to support the 3.9.2 version and newer ones.

No, it cannot. You need at least 4GB RAM to support this device on your machine.