Your level of experience with mesh network systems should guide you in choosing a suitable device. Some of the options that you can focus on include Orbi, Velop, and Amplifi. Find out how they compare.

We live in a two-story house made of brick and concrete. Since we relocated to this house, we have never had a stable internet connection. Our teenage kids are always complaining about how the internet sucks since streaming movies is never a great experience. Though we have been relying on the regular router for years, we were ready to make changes to boost our network. Making the transition was, however, not easy since the first mesh network system we chose did not give us the great coverage we were searching for. We, therefore, decided to compare more models to find the best one for our home. This is what we found out.

What are the differences between Orbi, Velop, and Amplifi?

Orbi vs. Velop vs. Amplifi – how do they compare?

While most of the mesh systems such as Amplifi come with two radio bands, advanced devices such as Orbi and Velop have three radio bands. The extra band enhances the performance of such units.

Most internet users are keen on the design of mesh networks since they look for one that can look good when placed at different points in the house. If this is what you need, the cool design of Amplifi will impress you. Its router comes with a nice looking touchscreen that informs you more about your network. Though Orbi and Velop do not look bad, they do not have this feature. Orbi units look like plastic boxes with some rounded edges, while Velop units take the shape of tall rectangular columns.

Orbi vs. Velop vs. Amplifi – a comparison overview

Even though Orbi is not the fanciest router you may find in the market, it can deliver the numerous benefits of mesh networks at a reasonable price. The minimalist design of the orbi router makes it blend in with your interior décor. This mesh wifi system looks like small plastic boxes featuring rounded edges. The top part has some heat vents on them.

Orbi is a tri-band router that is known for its high performance. Two of the radio bands in this system are designed for connecting devices, while the extra band can be used for wifi backhaul. This can transmit data between the router and satellites. For you to start using this device, you should plug in the router and wire it to the modem through the internet cable. Ensure that you download the app on your smartphone and follow the guideline to set up your mesh network.

Feel free to monitor the different devices connected to it from time to time and modify the settings according to your preference. This unit allows you to conduct speed tests and even set guest networks. The unit also offers MU-MIMO support, which ensures that you enjoy great internet speeds even when you add a couple of devices to your network.

We like the way this mesh network system transmits wifi over a long distance. The main router and three satellites can offer network coverage up to 5000 sq. ft. You will also like the availability of 4 Ethernet ports included in this mesh network system. While one of the ports connects to the router, you can use the rest to connect things likes a PC or printer. You will also notice a USB port at the back part that can support particular features. Though most of the Orbi features are free, subscribing to its plan gives you more control of your network. 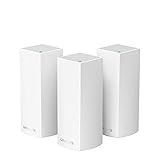 If you are thinking of upgrading to an advanced mesh wifi system and don’t mind paying more for advanced functionality, you should consider Velop. It is designed to blanket your home with a strong wireless network. Velop comes with three nodes that work together to boost the network coverage in your house.

If you already have an existing network in your home, you can extend it by buying a single Velop device. We also like the design of this mesh unit. It comes in the form of tall columns which you can place anywhere around your home. The system also contains two Ethernet ports and a cable clip that lets you organize the cables neatly.

Though the set up for this mesh network is quite straightforward, you cannot do it via a PC or laptop. You have to use the mobile app, which is available on iOS or android. The app can even help you position Velop satellites around the house. It gives you suggestions on strategic locations where you can position them. On the top part of the router, you should notice the LED, which helps you monitor the signal strength of your network.

Using this system also gives you access to the guest network to help you control who can use your internet. We also like how Velop integrates with Amazon Alexa. Though Velop is not the cheapest mesh network system in the market, it delivers high performance. 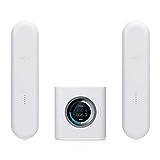 This is a plug and play system that has 3 x 3 wifi specs. The unit can cover even a large home with the internet. Before you choose this unit, you should confirm that you have enough power sockets around your home. We like the mobile app since it offers clear guidelines on how to set up this mesh network. Amplifi comes with three identical pieces. One of them represents the router, while the remaining two act as mesh points.

Unlike most of the mesh units, the router of this system features a cool looking touchscreen. This screen contains a lot of information that can help you understand your network much better. It also glows white to show you its status. Since some people find the light distracting, the manufacturer makes it possible for users to dim the screen, especially at night. You can even use the night mode if you want the light to remain dim for a couple of hours. You will also notice some other useful features on the router, such as a USB port and LAN ports.

Since the mesh points come pre-programmed, you only need to plug them in to start enjoying the services of this router. We liked the unique design of this mesh network system. Since Amplifi is a dual-band router, it does not have a dedicated wireless backhaul. It also lacks some of the features you may find in other units, such as online protection.

Choosing a particular mesh network may be a personal decision, but you have to consider a lot of factors. Doing this can prevent you from wasting cash or getting frustrated after the purchase. We have simplified things for you by discussing some popular brands above, namely Orbi, Velop, and Amplifi.

Verdict: So, which is better? Orbi, Velop or Amplifi

We took our time to test these three mesh wifi systems and found out why people have differing opinions regarding them. Following numerous tests, we found out Amplifi was the simplest to use due to its plug and play mechanism. Despite this, it lacked some of the crucial features that a good mesh network should have. Though Velop had more features compared to Amplifi, it was not as reliable as Orbi.

Orbi is a tri-band system that offers great network coverage, more Ethernet ports, and user-friendly app. We also liked the services included in its subscription plan since they gave us full control of our network. From our findings, we concluded that Orbi is better than Velop and Amplifi.

Why do people view Velop to be flexible?

The manufacturer gives you the option of buying this device as a single unit, double or triple pack.

No. If you decide to add lots of devices to your network, you make experience slow internet speeds.

Virtual Private Network Vs File Transfer Private – How do they...

WebDAV Vs FTP –How do they compare

VPN vs SFTP – How do they differ

TFTP Vs SFTP – How do they differ

SSH Vs SFTP – Are they the same?

SFTP Vs SSL – How do they differ

SCP Vs SFTP – Which is better for file transfer?

SCP Vs FTP – Which is the better pick for file...

OFTP Vs FTP – How do they compare

TFTP vs FTP – How do they differ?

SSH vs FTP – How do they differ?

SFTP vs FTP – Which file transfer protocol should you use?

FTP Vs Cloud – a comparative review

SFTP vs FTP over SSH –Which is more secure?

EDI Vs FTP – How do they relate

Connect Direct Vs SFTP – How do they compare

AS2 Vs SFTP – How do they compare

Fios vs. Time Warner – Which is the most convenient internet...

U-verse vs. DSL- Which of these internet service providers is tailored...

Time Warner vs. Dish- Which service provider shines out for you?

AT&T vs. Time Warner – Which is the better internet service...

Dish vs. DirecTV vs. Cox – Which is the most reliable...

Frontier Fios vs. Comcast – Which is the better Internet Service...

Verizon vs. CenturyLink – Which one is the better internet service...

Cox vs. Windstream – How do these internet service providers compare...

CenturyLink vs. AT&T- Which of these is the best internet service...

U-verse vs. Cox – Which is the best internet service provider...

Cable One vs. CenturyLink- Which is the best internet service package...