You might not put much thought into choosing a mesh wireless router, let alone any kind of Wi-Fi router. However, it is always good to take time in making a good choice, which is why we want to compare two popular routers in this article – the Netgear Orbi vs. Amplifi.

We can understand if choosing a good router is a difficult choice; you have an increasing number of devices to connect, and this raises the importance of a good home network, which is why mesh networking is increasingly popular. However, none of these come cheap, and you do not want to waste your money, so we have done much of the work by looking at two of them to help you make the best choice.

What are the differences between the Orbi and Amplifi?

Netgear Orbi vs. Amplifi – How they compare

The design of the Amplifi router is not like most others – it does not have external antennas or switches, and resembles more of an alarm clock than a typical Wi-Fi router. Measuring 3.9 inches, it is really attractive and you will not need to hide it away.Other than that, the white ring that will shine when the router is on, the Amplifi router has a 1.6-inch touch screen will show the time, date, and day.

The extenders of the Amplifi router are 7.1 inches long, and take on the design of contemporary art. Thanks to their slender design, you can plug them into an AC outlet directly. Other than that, they will also come with discreet LED meters that indicate signal strength, as well as the ability to connect in a wireless manner. In order to aim the antenna in specific angles and boost reception, they also have cleverly designed ball-and-socket magnetic designs.

When it comes to the Orbi – rather than the easy-to-stash design, the design you get here is in form of a big tower that has measurements of 8.9 x 6.7 x 3.1 inches. If you are looking for a router to easily hide, this is not the one for you.

Basing it on the 3×3 MIMO technology, the Amplifi is a high-performance router that will include two mesh points or wireless extenders. These combined come at a very expensive price, which make it difficult to purchase if you are on a tight budget.

Through the use of IxChariot software when your Wi-Fi environment is crowded, our testing experience shows that the Amplifi router has a combined throughput of 368.2 Mbps at 5 feet, and it drops to 230.9 Mbps when  you move to 150 feet; which is great if you are sharing a broadband connection of 100 Mbps.

On the other hand, the Orbi will transmit Wi-Fi data on 3 bands, unlike the Amplifi that uses 2 bands. The main 2.4GHz and 5GHz bands will give a throughput of about 1.2 Gbps, while there is an additional 5GHz band, 1.7 Gbps radio, which will exclusively cater to backhaul connections and ensure your connections stay strong.

In order to support the arrangement, every Orbi device will have 6 high-performance antennas that surround its perimeter – although you should also note that the satellite and router units are not interchangeable with each other. Orbi also uses MU-MIMO technology that sends focused data streams to several devices simultaneously, and each device comes with 4GB of solid storage space, 512MB of RAM, and a 710-MHz quad-core processor.

The Orbi is indeed a powerful router, just judging from the specs it has. The combined average is 552.1 Mbps at 5 feet, making it 50% faster than the Amplifi router.

Even if you are a very tech-savvy user, the process of getting the router active and operating the way you want can be a tiresome process, and yet this is something you might not think much about when getting a router.

There is some good news with the Amplifi router though – you will have very little chances of experiencing confusion when setting it up. This is because of its incorporation o you smartphone, through the use of the onboard touchscreen, as well as a Bluetooth connection to get you running as quickly as possible. All we needed to do was to plug the mesh antennas, and the system starts running in less than 5 minutes.

The app is also very intuitive in use, as it gives you the options to manage all the router’s settings from your desktop or smartphone. The app also includes a live chat aspect, unlike most other routers, and this will connect you directly to the support team in case you come across any issues.

One of the major advantages when looking at the Orbi, and any Netgear router in general, is the ease of setup. The devices will already come pre-paired when you get them, and the setup will not require you to know encryption, a list of IP addresses, a mobile app, or Ethernet. In fact, the setup is through a Mac or PC, or through a smartphone that can connect to Wi-Fi.

After the Orbi software completes the network check, the router is set up, and you can then power the satellite and allow it to be scanned by the router.

Even though this is pricey, the Orbi is among the most powerful Wi-Fi routers we have used – regardless of whether you use its mesh extension or not. Like the Amplifi, it is a breeze when you are dealing with the set-up, and it has great power and range. In fact, it has a dedicated channel that handles router-to-extension data assists the system to squeeze out the highest levels of throughput to satisfy your requirements.

When it comes to the parental controls and security, it will start with a semi-random name and passcode, although you can (and should) change it to a more secure passcode as soon as possible, and use an OpenDNS account for the parental controls. This makes it more secure than the Amplifi option, even though they have very similar attributes in their performances. 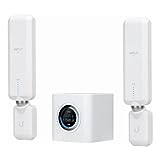 This might not be the cheapest or fastest mesh network router, but it gets points for reliability and ease of setup even if you are setting up your network for the first time. If you have thought about using a single router for your home, Amplifi HD takes that notion out of the water – it includes extenders in the package, which you can then use to fill your home with mesh Wi-Fi networks.

The router will have an input for connection to the modem, and also 4 downstream LAN ports of the RJ45 gigabit design. The router has a USB 2.0 port as well, although this does not have a specific purpose yet (although future updates might make it into a way of connecting an external printer or drive).

There is a drawback though – there is no firewall or QoS feature. This means that you cannot control the bandwidth priority or enhance your online security, which makes it a less than ideal choice if these are a priority for you.

Verdict: So which is better? The Netgear Orbi or the Amplifi?

There are plenty of mesh network routers in the market today. The great power and throughput that the Orbi provides is what makes it our clear choice for this article though, as it provides you plenty of value for your money – as long as you can get past its pricing.

When using Amplifi, can I select the access point my devices use?

No, not really. The main benefit of using Amplifi and other mesh networks is that they will move devices automatically to the most efficient access point.

Can Orbi work with my existing ISP?

Yes, Orbi works with all major ISPs – these include Spectrum, XFinity, COX, and so on.