The Netgear nighthawk ax8 is a Wi-FI 6 standard router that promises top performance and throughput. How does the ax12 compare? Read the Netgear AX12 VS Netgear AX 8 comparisons to find out.

With the number of routers in the market today, there is a struggle that comes with choosing the right one. Wi-FI devices have increased and so has the broadband and Wi-FI networks. Netgear is top in the market when it comes to creating high quality routers. The Netgear AX12 and AX8, both running the latest Wi-FI standard, are designed by Netgear to handle the increasing demands for a better network. These two work great at ensuring wireless home networks run smoothly but what differentiates the two? Which one is more powerful in terms of performance and connectivity? Read this Netgear ax12 VS ax8 comparison to find out.

What are the differences between Netgear AX12 and Netgear AX 8?

Netgear AX12 VS Netgear AX 8 – How do they differ?

When it comes to a physical standpoint it is difficult to differentiate the Netgear AX12 series from the AX12. These two routers look virtually the same and weigh the same as well. Both routers are designed in au shape design and also made with black polymer chassis. They both have 4 hidden high performance antennas that extend reliable and strong Wi-FI signals. They are pre-optimized to give you the best Wi-FI performance.

Both routers also have bright LED lights on the edges and provide Led on and off buttons. The layout of the two routers is almost identical; except the backsides have different options for networking ports. This is because the two routers have different networking capabilities. While the Netgear AX8 is fitted with 5 Ethernet ports, the AX12 has 4 gigabit Ethernet LAN port, a 5-Gig port and a WAN port.

The NETGEAR Nighthawk AX8 and AX12 have a very identical design/layout, except for the few more ports on the Netgear AX12 which makes it better in terms of functionality.

The Netgear nighthawk RAX80 (ax8) is powered by a 64-bit quad core CPU that runs at 1.8GHz, a 512RAM, 4 amplified antennas and 25Mb of flash memory. This is a AX6000, 8 stream dual band router that runs on a speed of up to 4.8mbps on the 5GHx band and 1.2mbps on the 2.4GHz band. To add on the Wi-FI 6 features above, the Netgear ax12 supports beamforming. Mu-MIMO data streaming, 160MHz Channel bandwidth and smart connect band steering.  The router also supports Google assistant and voice commands.

The Netgear RAX120 (ax12) on the other hand is powered by a 2.2Ghx quad core processor. It has 1gh flash memory and 512MB of RAM.  Both the ax12 and ax8 models have a smart connect feature that allows you to select a Wi-FI band that is most appropriate for your device on any network and depending on its location.  Both router models support the latest Wi-FI standard which is Wi-FI 6.

The Netgear Nighthawk AX8 performs better than the Netgear ax12 router.  This is because the AX12 can handle more data than the ax8 due to the impressive 2.2GHZ quad core processor. It is ideal for powering 4k streaming, gaming systems and smart home apps. 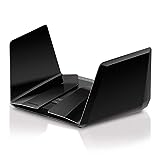 The Netgear ax12 is a powerful 12-stream router that utilized the latest 802.11ax tech to deliver fast file transfer and throughput speeds. The Netgear ax12 is among the first routers by Netgear made to deploy the new Wi-FI standard. It is fitted with 8 high performance antennas that amplify the Wi-FI signals to ensure you have reliable Wi-FI coverage at the maximum range.

When it comes to wired connections.. The Netgear ax12 is built with a 5gbps port and multiple gigabit Ethernet ports that allow internet connections. This router has a quad-core optimized processor that can be controlled through Google assistant or Alexa.

The ax12 is a 12-stream ax6000 Wi-FI router that promises to increase data capacities at home.  it is an AX optimized 64bit, 2.2ghz quad core processor router that will power all your smart home applications, online gaming, 4k ultra HD streaming and more. The router can handle Wi-FI speeds of up to 6gbps.

The Netgear ax12 also features Orthogonal Frequency-Division Multiple Access which increases the network capacity and reduces any Wi-FI latency for a better home network experiences for all your devices. 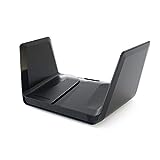 The Netgear ax8 is built with a futuristic design; the foldable antennas/wings make this router’s placement easy.  It also has a couple of wall mount slots on the rear for people who would rather mount the router for a better connection. At the back of this router are 5 gigabit Ethernet ports, 2 of which you can aggregate to give you a 2gbps port.

You can also aggregate the first gigabit port with the WAN Ethernet port for a fast broadband. It is also designed with 2 USB 3.0 ports that allow storage sharing. The Netgear ax8 uses the latest Wi-FI 6 standard and is built to reduce network lag or congestion. This Wi-FI 6 standard requires devices with the same for optimum performance.

The Netgear nighthawk is an 8×8 router which means it provides you with 8 individual streams, each with its own bandwidth. You can have 4 2×2 clients for more performance or a single stream.

Conclusion: So, Which is better – Netgear AX12 or Netgear AX 8?

The NETGEAR NIGHTHAWX AX12 is the clear winner in this comparison. This is because the AX12 can handle more data than the ax8 due to the impressive 2.2GHZ quad core processor. The router can sustain more speed when compare to the Netgear AX8 router.  It is a powerful 12-stream router that utilized the latest 802.11ax tech to deliver fast file transfer and throughput speeds while the AX 12 works better with Wi-FI 5 enabled devices.

Can I use this router without 802.11ax supported devices?

The wireless tech AX is backwards compatible with ac. This means you will be able to use them bit won’t get better speed like the wireless 802.11ax enabled devices.

Is the Netgear ax12 model equipped with WPA3 standard?

This model router does not support the WPA3 standards like most routers released by Netgear modes produced before it.