Gigabit Ethernet has been used for many decades now, with the 1 GB Ethernet being the most popular today. The following is a detailed comparison of the two Ethernet standards and how they compare in bandwidth and performance.

Routers and modems are some of the networking devices that come with Ethernet ports. Ethernet ports allow for external device to be connected for high speeds. However, the Ethernet rating varies in different devices. This is because since 2002, the Ethernet ports have been regulated by a universal standard based on the maximum speed they allow. In 2002, the gigabit ethernet (1 GB) was launched in devices and featured speeds of up to 1 Gbps. But four years later, 10 GB ethernet was launched and has been gaining traction till today. Even with ten times the speed, the latter has struggled to dominate the market and this is because of one major reason: there is no need for such high speed since the 1 Gbe works perfectly for majority of the people.

To understand these two standards, it is important to understand the roots where it all begun. Ethernet was first introduced to the world in 1980 with the first version allowing up to 10 Mbps. This was quite decent since internet was relatively new and speeds were not high yet. Later in 1995, the second version was released and was known as Fast Ethernet or 10/100. This meant the speeds were increased to 100 Mbps. Just three years later after that, the speed was increased further to 10/100/1000 Mbps which is what we have till now – gigabit Ethernet. Then in 2002, 10 Gbe interface was launched and provides up to 10 Gbps. However, it is yet to reach the majority of consumer products since 1 Gbps is more than enough for most users today. It is much more popular in large enterprises and industries where very high speeds are required for many users.

The 10 GB Ethernet was launched in 2002. It is also referred to asas 10GbE or 10 GE. This standard was designed for speed storage networks (SANs), enterprises and metropolitan networks, rather than home use. First, there are no internet service provider that provides such speeds for home use. And second, you don’t really need such high transfer rates for home internet. However, its popularity is still growing with five ISPs providing 10 GbE in the US by 2016.

Lastly, like the previous standard, 10 GE also used copper and fiber material for transfer of data. Copper was first used in 2004 and featured four twin axial cables. This greatly limited the distance leading to the use and implementation of fiber that increased the range to about 200m from 15m on copper. Today, there are a few routers with the 10 GE port and they include the following

Netgear has never been afraid to try out new things especially with their high end performance routers. It is therefore no surprise that the X10, released in early 2016, came with a 10 GE port. But that’s not the only port it has. There is a total of six gigabit LAN ports and four USB 3.0 in addition to the 10 GbE port. When it was released, it was regarded as the fastest router in the world. This is because it allowed a theoretical maximum throughput speed of up to 7 Gbps. Being a triband router, the bandwidth was distributed in the following way: 4.6 Gbps on the 60 GHz band, 1733 Mbps on the 5 GHz and 800 Mbps on the 2.4 GHz band. In a real world environment, this translates to about 900 Mbps.

Another amazing feature that made this router stand out among all its rivals is the Plex Server Support they implemented. The server is built into the router and is meant to handle 4K transcoding without a PC. This, together with the powerful 1.7 GHz quad core processor enables the best streaming abilities you’ll find in any router. However, Plex includes a paid subscription after the three month trial period is over.

Other features include: beamforming, MUMIMO support, traffic optimization and analyzer, 512 MB flash memory for the firmware and more.

Among the best gaming routers in the market is the Netgear XR700. With a menacing design, the router also boasts one of the best performance in any game router. It is a triband router with superb performance and a high price tag to go along with it. One of its standout features is the 10 GbE port that is included as WAN. On top of that, there are six gigabit Ethernet LAN ports and two USB 3.0 ports.

Being a gaming router, the design is one of its best features. It comes in one design and color with a sleek black casing finished in matte design to prevent dirt from sticking onto the surface. The black is covered in red trims and touches which give it a beastly look. In addition, the model is also relatively large measuring 2.5 x 9.6 x 12.7 inches to carry the large and powerful microprocessor.

The 1 GbE is the most popular Ethernet standard worldwide. Almost every router has at least one gigabit Ethernet port. This is because the speed is high enough for heavy tasks such as streaming in 4K and online gaming. Basically, it transmits at 1 GB per second and is used to connect servers and PCs in a local area network. Like the 10 GE, this one also transmits in full duplex using Ethernet switches and half duplex in shared environments. The following is an example of a router with gigabit Ethernet ports. 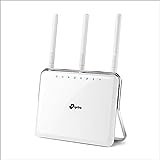 The TP Link Archer C9 is a 2020 release that features some of the best features you can find on a router today. This mid-level router is great for anyone on a budget who wants robust and balanced performance. It is great for office and home use alike. One of the best features of this router is the long range it provides. With a coverage of about 3500 square feet, this router will work perfectly for most homes and medium sized open offices. It has a throughput speed of 1.9 Gbps across its dual bands. This is enough bandwidth for anything from 4K streaming to online gaming. But perhaps the most outstanding feature of this router is the design. The C9 comes in a pristine white glossy white color made from toughened plastic material. At the back, the router has a lever support that holds it upright to stand on its own. The router also comes with three relatively long external antennas for receiving and sending signals.

Overall, there is no need to spend a fortune on a router with 10 GE port especially for residential and home use. The standard is reserved for large enterprises and institutions.