Are you looking for an ideal router with which to get a home internet connection? Linksys devices have long been known to be fast and ideal for home connections, and the Linksys EA6100 AC1200 does not disappoint.

My Mom has never quite been the techy type, but recently, she asked me to get her a good modem and router so she could use Amazon Alexa around the house. Shocked as I was, I purposed to find her something that would be both effective and easy to use. Since she doe not live in an overly large house, I decided to get her a medium range and medium speed router. The Linksys EA6100 AC1200 router bears both characteristics, and my Mom couldn’t be happier. 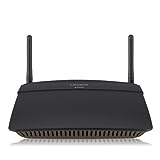 A lot of the time, we tend to go for the best of the best, and in this case, we tend to buy routers that promise the fastest speeds and widest range of transmission, even when we do not need them. Have in mind that more is not always better, and sometimes we are left with devices we do not need to begin with.

The Linksys EA6100 AC1200 comes with medium transmission speed and range, but it proves quite reliable and ideal for medium sized homes. It operates on the 802.11ac standard which makes it a Wi-Fi 5 router. This standard bears the capacity to support some of the fastest internet speeds after the 802.11ax (Wi-Fi 6) standard.

This router comes as a single unit and only relies on its antennas to be able to transmit its speeds. When it comes to cumulative throughput, the Linksys EA6100 AC1200 delivers speeds that peak at 1,200Mbps and covers a range of about 1,500 square feet. For increased speeds and range, it is fitted with two external antennas fitted on the back panels

As an advantage, the Linksys EA6100 AC1200 has a good degree of compatibility and can work with all types of modems and Internet Service Providers. For this reason, you do not have to worry about what ISP to go with since you will be home and dry with your most preferred one.

Finally, this device comes with a myriad of performance enhancing features along with good user friendliness. You will find navigating it operation and use quite easy and straight forward, even when you are not the tech savvy type.

There are no rules as far as design goes when it comes to the general outlook of a router. After all, the tech world enjoys a good deal of freedom and versatility, and nothing is too modest or too complicated. Linksys devices come in all shapes and sizes, and the Linksys EA6100 AC1200 bears a unique look that mimics a square-like space ship.

In matters dimensions, this device measures 6.85 wide by 1.26 inches high by 7.87 long. These measurements indicate that the device assumes a horizontal orientation and that it requires a good deal of space for installation. This can be a bit of an inconvenience, especially where there is not much room to spare.

The Linksys EA6100 AC1200is made using rigid plastic that is incredibly strong, a characteristic that makes the device quite durable and resistant to damage in case it falls. When you look at this router, you will notice that its antennas are on the outside, a feature that makes the device look bulkier and more imposing than it already is. They are, however, quite helpful when it comes to increasing the speed and range of transmission throughout the home.

This device’s side panels are lined with slender slits that are ideal for breaking the monotony of one solid look. More importantly, they help to keep the device cool, especially during intense activity and during months that are exceedingly hot. This conveniently prevents possible damage that is heat related.

As earlier mentioned, this device operates as s single unit, but it does a great job none the less. It runs on the 802.11ac standard, making it a Wi-Fi 5 router. For this reason, the Linksys EA6100 AC1200 possesses the capacity to transmit high interne speeds over a sizeable range.

When installed in your home, the Linksys EA6100 AC1200 Dual Band Router will deliver speeds that peak at 1,200Mbps. However, this speed is distributed from two bands since this router is a dual band device that has a 2.4GHz band and a 5GHz band. From the smaller 2.4GH bandwidth, this router delivers a 300Mbps throughput while the larger 5GHz bandwidth delivers an 867Mbps transmission speed. With this kind of output, you will be able to experience high intensity activity such as gaming on multiple consoles and streaming 4K videos on several devices at a time.

Inside the Linksys EA6100 AC1200 Dual Band Router is a 580MHz CPU processor which combines effort with a 512MB RAM to deliver optimal performance. This, however, is considered quite small and is likely the reason for this router’s somewhat slower speeds when compared to others.

The Linksys EA6100 AC1200 stands out as a reliable device, and even though it does not operate as a mesh router, it is able to cover a 1,500 square feet home with comprehensive coverage in all rooms and on all floors of the home. This way, you can be certain that you will not be experiencing any dead zones during internet usage.

Ports are an essential part of a router since they add to the possibility of having multiple connections. Routers vary with the number of ports they have to offer, and some come with quite a number. The Linksys EA6100 AC1200 Dual Band Router comes with a total of 5 ports which are fitted in its back panel. One of them acts as the WAN port while 4 others act as LAN ports. These ideally allow you to connect such devices as laptop and desktop computers, gaming consoles, smart TVs, printers and other internet compatible devices.

When it comes to user friendliness, you are going to find that interacting with and operating this device is quite easy. It comes with a downloadable mobile app that allows you full control from wherever you are. You can perform such activity as switching the router on and off, running speed tests and even managing guest networks. Additionally, you can activate manage parental controls with ease from your phone.

This device proves an ideal acquisition for persons that have homes which span an approximate 1,500 square feet. It is also a great router for families that are not too heavily dependent on really fast internet speeds and who do not participate in high intensity activity such as professional gaming on multiple devices at the same time. While this is doable, you may notice eventual slowness over time.

Are there alternatives to the Linksys EA6100 AC1200 Dual Band Router?

Yes, there definitely are. the routers market is dominated with a wide array of devices that bear the capability to amply cover a medium sized homewith decent internet speeds over a sizeable range. In place of the Linksys EA6100 AC1200 Dual Band Router, you can use the Amazon Eero Pro, the Asus Lyra Trio and the Google Nest Wi-Fi. They boast really good speeds and decent range coverage.

Yes, you should. However, if you would like to experience intense activity on a regular, try and get a device with a more powerful processor and that can support much higher speeds for a great internet experience.