The significant functions of a router are to interpret layers 3 and 4 addressing, single out a convenient path for data flow, and link dissimilar networks.

Installing a networking router at home can be quite an exciting venture until it starts dropping some devices off the network. Well, this is something that I had to learn the hard way, so to prevent people from falling victims to such, the below excerpt will sample the Dlink and Tp-Link routers to determine how well they stack up.

For many netizens either at home or in a business setting, wider coverage and strong signal strengths are vital. Routers perform a variety of functions as indicated above, meaning that they can be adopted for varied applications, however, if the router you have invested in, cannot fulfill its primary role, which is connectivity with strong signal strengths, then you need to swap it for something better.

What are the differences between D-Link Dir 615 and Tp-Link TL Wr41n?

Cyber threats are a real concern in the 21st century and many internet users are keen to use applications and networking devices that will protect their information against third party interference. And while the hackers are sharpening their hacking prowess, networking device manufacturers are moving at the same speed and seems to be five steps ahead.

They have thus been able to offer comprehensive security protection on both the internet-enabled devices and the applications that they use. For example, the D-Link Dir 615 has made it its mission to offer security in its wireless connections, where it has incorporated a couple of security standards, such as the MAC address filtering, the WMM, the WPS, the WPA/WPA2, and WEP.

D-Link has also been equipped with a built-in firewall which helps in blocking unwarranted access, blocks out hackers, and users are also be restricted for logging into websites that are a security threat to the network. The advanced security features also puts the parent’s mind at ease by blocking access to adult content websites.

A good networking device should enable customization, and that is why the D-Link router Dir 615 has incorporated an on and off button, so that users save on power by switching off the device when not in use. And when it comes to the Tp-Link router, the Wr841n doesn’t offer its users many options and here you will only be able to access the WPA/WPA2 encryption standards that help keep third party prying eyes off your network.

For one to be able to engage the bandwidth-intensive activities, they also need to be connected to a network that offers high internet speeds. And while this might be a pipe dream if your ISP cannot match the speeds of your installed router, the opposite will even accommodate more users in the same network without compromising on speeds.

Therefore if your ISP can match the speeds offered by the D-Link Dir 615, then you can be sure of enjoying high internet speeds either in your home or office. Be informed, however, that the above is only achievable within the predetermined range of operation provided by the manufacturer, and if you wish to extend coverage, to cover your back yard or the rooms upstairs, then you will have to invest in a Wi-Fi access points and have the nodes installed in different favorable locations.

The D-Link Dir 615 router has been configured to work as a base station necessary for the connection of wireless devices that operate within the 802.11g, 802.11b, and 802.11n standards. Tp-link Wr841n, on the other hand, seems to be having all its ducks in a row, as it can provide its users with up to 15x the speeds while covering 5x the conventional range. And just like the D-Link Dir 615 users will be able to enjoy transmission rates of up to 300mbps.

Wireless performance is still a tricky subject especially when it comes to thick walls, metallic surfaces, and electronic devices. If your router is placed in close proximity with any of the above devices then you are going to experience poor Wi-Fi signals. For the Tp-Link Tl Wr841n however, the manufacture has configured the router, to be able to prevent the loss of data while covering a wider range.

So, while Tp-link will offer better networking performance D-Link offers its users advanced capabilities of the wireless networks. To which end, users will be able to create separate wireless networks complete with individual security settings; they will also be able to utilize the maximum rate limitation feature. And while users can allow guest access, the later will not be able to access devices and resources on the routers LAN.

Configuration and set up

Tp-link offers simple WiFi connection set up via the WPS button, setting up the unit is also pretty easy as users have the option of either using the optimized user’s interface, or the incorporated CD giving even the newbie’s an easy setup option and have them online in less time. D-Link has also been equipped with an easy configuration and updates feature.

Even better is that users of the Russian origin and those from the English speaking countries will have an easy time, and be able to set up the device in fewer minutes, as it comes equipped with the two languages and a user-intuitive interface.

The D-Link Dir 615 has been equipped with up to two external antennas to help enhance coverage and offer strong signal strengths to devices connected to the network. Besides by using the draft 802.11n technology the router can maximize on speeds. Other significant features equipped on the device are such as the latest advanced wireless security features, designed to block unwanted access.

And to make the setup process easy for the not so tech-savvy, D-Link Dir 615 has incorporated a setup wizard that will hold your hand and walk with you right to the end of the setup process, as you try to configure your internet connection. 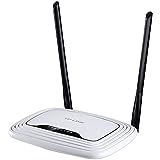 The Tp Link TL Wr841n is a rather toned down router, with up to five ports at the back for ease of use with the wired connections. The unit has incorporated two networking antennas, used to achieve enhanced WiFi signals, and to extend wireless coverage. The incorporated 300mbps wireless speeds, are to ensure that users who are engaging in the bandwidth-intensive activities do not experience downtimes or slow WiFi speeds.

The incorporated security features have also been boosted, and users will just need to utilize the WPS button.

Verdict; which router is the best the D-Link Dir615 vs the Tp-Link TI Wr841n

The Latter is also a stable networking router but with toned-down features when compared to the D-Link router. Important to note is that both units do offer up to 300mbps WiFi speeds, therefore, if your ISP can provide the relevant speeds then you can engage the bandwidth-intensive activities without causing glitches in the network.

The D-Link router Dir 615 does not have a default password rather a default admin username.

Red light is indicative of the absences of WiFi connection