The Cat 7 and Cat 8 ethernet cables are able to support some of the fastest internet speeds for homes and office transmissions. So, what about them makes them special, and are they really worth the buy?

Smart homes are increasingly becoming a norm, and almost every other family has a high speed internet connection for home applications. Activity such as gaming and 4K video streaming has taken center stage and demands high speed internet connections. While the Cat 7 and Cat 8 cables are ideally created for use in commercial settings, they are slowly making their way into homes and small offices owing to their reliability and capacity to perform exceptionally well. So, which one of the two is a better cable and why?

What are the differences between the Cat 7 and Cat 8 Ethernet cables?

Cat 7 vs. Cat 8 Ethernet Cables – How do they compare?

Ethernet cables are made for the transmission of data from a source such as a modem or router to devices such as laptop and desktop computers, gaming consoles and smart TVs. This data is transferred in the form of electromagnetic impulses, and this is why all ethernet cables are made with copper wires in the middle. Usually, each cable has 8 copper wires inside, and each one is covered with a thin layer of PVC casing.

The Cat 7 cable is a Shielded Twisted Pair Cable (STP), an indication that the 8 copper wires are twisted in twos to make 4 pairs of copper wire. For extra strength, each twisted pair is further covered with another PVC layer which is bound quite tightly. This tightness is important for two reasons; it adds structure to the cable and also reduces the chances of crosstalk by preventing the cables from moving about too much which would result in interference. Once the cable each twisted pair is tightly covered with the PVC casing, all 4 pairs of copper wire are then encased in a braided aluminum foil which also adds structure and strength to the whole cable. The outer jacket is made using heavy duty PVC which makes the cable quite strong and durable. You will notice that the Cat 7 is not as flexible as older cables, and this is because of the many layers of shielding.

If you were to make a cross sectional cut of the Cat 8 cable, you would notice that its construction is almost similar to that of the Cat 7. However, in place of the thin PVC around each twisted pair of copper wires, there is an aluminum shield which adds more strength to the cable. All 4 pairs are then covered in a braided aluminum shield for extra strength and reduced crosstalk. The outer jacket of the cable is made using strong PVC, an aspect that adds more strength to the cable.

The Cat 8 cable features a more stable build than the Cat 7 ethernet cable, making it the better cable of the two.

When it comes to delivering high speed internet, the Cat 7 ethernet cable is able to support Gigabit speeds. It is largely preferred for its capacity to transmit internet speeds that peak at 10Gbps. Usually, this cable is able to sustain this speed over a distance of 100 meters, making it ideal for transmission over long distances. However, beyond this distance, the speed becomes a bit distorted. On top of this speed, this cable bears the capacity to support a 600MHz frequency.

On the other hand, the Cat 8 ethernet cable takes the transmission speed game to a whole new level. It also bears the capacity to transmit speeds that reach an impressive 40Gbps. However, unlike the Cat 7 that is able to transmit high speed over a distance of 100 meters, the Cat 8 ethernet cable can only sustain its 40Gbps speed over a maximum speed of 30 meters. This makes it quite ideal for smaller spaces such as homes. When it comes to frequency, the Cat 8 is able to support a frequency of 2000MHz (2GHz) which is quite impressive.

Even though the Cat 8 ethernet cable can only sustain its speed over a distance of 30 meters, it is able to support much higher throughput than the Cat 7 cable, making it the better one of the two.

The Cat 7 cable is more likely to be found in a commercial setting such as an office or an industry. It is quite hardy and can withstand a lot of physical pressure. On top of this, it can transmit speeds over long distances, and this makes it ideal for use in data centers.

The Cat 8 is also an ideal cable for commercial settings. However, seeing as it is able to cover a significantly shorter distance than the Cat 7, it is more likely to be found in a smaller environment such as a home or office setting.

Since the Cat 7 is a more versatile cable, it outdoes the Cat 8 where distance and practicality are concerned. 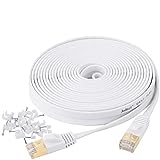 This cable is arguably one of the best and most reliable ethernet cables in the current internet transmissions field. It becomes an easy favorite due to its ability to transmit at incredibly fast speeds and over long distances without its signal getting weakened.

More interesting, however, is its overall build. The Cat 7 is not just made for speed, it is also built for resilience and durability. Inside it are many strong shields that ensure it does not break easily even when bent. However, you may experience a significant amount of rigidity, especially when you need to install it in a corner or tight bend.

This cable is versatile and can be used in a home, office or even data center for high speed internet transmission. 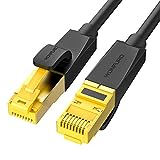 When it comes to high speed internet transmissions, the Cat 8 cable affirms itself as amply capable of handling extremely high throughput. It is currently on of the fastest ethernet cables, delivering a maximum transmission speed of a jaw dropping 40Gbps.

On top of this, it features a really strong build that gives it the capacity to handle high stress environments with calm and cool. Additionally, it boasts the capacity to work without experiencing a lot of interference, thanks to its many layers of protection and cover.

This cable is ideal for both home and commercial settings.

The Cat 8 ethernet cable is a better cable than the Cat 7 since it is able to support extremely high speeds and frequency, and it also has a much stronger build. The combination of these characteristics makes it a much better cable.

Yes, this cable is waterproof.