There are many intricate details that happen in and around telephones and computers that allow them to work seamlessly. It starts right from the actual build and ends with connections. If you have had to connect a device before, you know it could mean the difference between stress free delivery and frustration.

The Rj12 and Rj25 are connectors that are used mainly in the connection of telephone devices. They have a number of characteristics that are similar, but they also have a number of differences. So what sets them apart, and which one of the two would be the most ideal for your connections?

This article will look into each connector in detail to see their differences and help you decide the most ideal fit for you. Come along!

What are the differences between the Rj12 and Rj25 Connectors?

The Rj12 is a compact square device that is made from plastic. The material used is quite rigid and makes the connector durable. It is also transparent, allowing for the connected wires to be visible.

The Rj25 is also a square shaped device that is made from plastic. It is made using the same material as the Rj12, which makes it rigid and strong. The connector is also transparent, making for an equally intriguing look.

Both of these connectors have interesting configurations that are uncommon. The Rj12 has a 6P6C configuration. This means that it has 6 positions and 6 connection points. This gives the Rj12 the capacity to hold up to 6 copper wires at a go.

The Rj25 also has a 6P6C configuration. Just like the Rj12, it has 6 positions and 6 connection points. It can connect up to 6 copper wires at the same time.

The Rj12 connector is popularly used for the connection of system phones. This connector can only be able to handle one device at a go.

The Rj25 connector is most commonly used for telephone devices. The most outstanding thing about it is that it can be able to connect up to three devices at the same time.

The Rj12 vs. Rj25 Connector Overview 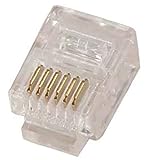 This connector is a compact device that is square shaped. It is often confused with the Rj11 for their almost identical looks. This device is made using plastic that is rigid and durable. It is also clear, allowing for the connected wires to be visible.

It has a 6P6C configuration that is not so popular among connectors. This gives it 6 different positions and 6 connection points. It has the capacity to handle up to 6 wires at the same time.

This connector has copper crimps that act as conductors between the device and the network source. They are coated in gold to keep them from rusting.

The Rj12 connector is most ideal for use in system phones.

This device is a smaller connector than the Rj12. It is made using plastic material that is rigid and durable. It is also a clear piece of equipment that allows for the connections inside to be visible.

It has a 6P6C configuration, meaning that it has 6 positions and 6 connection points. Just like the Rj12, it can handle up to 6 copper wires at the same time.

It uses copper crimps to transmit electromagnetic impulses from the network source to the telephone device. Since they are prone to rusting, they are coated in gold for protection.

This connector is unique since it can handle up to three devices at the same time. It is ideal for telephone device connections.

These two connectors are essential in connecting telephone devices to network sources. They have unique configurations but they differ in their capacities.

The Rj25 stands out for its ability to connect three different devices at a go, making it the better performing.

No, they have similar characteristic but they cannot be used in place of one another

You are likely to find it in receptions and contact centers.