The Asus ax6000 and Asus Ax6100 are really fast and can transmit data over a wide range. They are commercial grade routers meant for home use. So what sets them apart?

When installing internet routers for home use, a big number of people usually go for midrange transmitters, and the most powerful and fast are often times reserved for office environments. If you are an avid gamer, or if you like to stream your content, you may want to consider upgrading to routers that allow you to access fast speeds at all times.

The Asus RT-AX88U ax6000 and Asus RT-AX92U ax6100 are devices that are built for high speed transmission in the office setting, but they work exceptionally well in large multi-storey homes. They use the mesh networking system which gives them access to WiFi 6 speeds. So which one is better?

Let’s jump in to find out!

The Asus RT-AX88U ax6000 is a black device that has a rectangular shape. It measures 11.8 x 7.4 x 2.4 inches, and it looks quite sleek. It is actually not a big device, and its shape and form make it ideal to set on a flat horizontal surface such as a table. It has 4 external antennas that work to boost the efficiency of transmission to deliver the best speeds.

The Asus RT-AX92U ax6100is also a sleek device, and actually comes as a pair of two. The shape is more square-like than that of the Asus RT-AX88U. It measures 15.5 x 15.5 x 2.5 inches, making it slightly bigger. It also has 4 external antennas that give it the ability to transmit over a wide range. An extra 2 internal antennas give it quite the boost and enable it to transmit with no dead zones.

The Asus RT-AX88U ax6000 is a better looking router. It is neither too bland nor too fancy for the eyes.

This makes this router exceptionally fast, allowing for uninterrupted transmission at all times. It allows for 4K video streaming without downtime or buffering. It has 1 WAN port and 8 LAN ports for Ethernet connection. It boasts a 256Mb flash memory and 512Mb RAM. This device is ideal for large homes that are multi-storey.

It is an incredibly fast router that makes it ideal for a multi-storey home. It supports 4K video streaming for multiple devices at the same time. It also has a 2656Mb flash memory and 512Mb RAM. It has 1 WAN port, and 4 LAN Gigabit Ethernet ports.

The Asus RT-AX88U ax6000 is a better performer as it has better speeds and more ports for cable connections.

This router is one of Asus’ fastest transmitters. It is WiFi 6 compatible, making it quite fast and efficient. It is a moderately sized device that boasts a sleek design that makes it blend right into your home. It has two bandwidths that allow it to transmit at two different maximum speeds. The first 2.4GHz bandwidth transmits at a speed of 1,148 Mbps while the 5MHz bandwidth transmits at 4,804 Mbps.

It has 4 external antennas that give it the capacity to transmit wirelessly across a wide range. It transmits seamlessly in a large multi-storey home. It has the capacity to stream 4K videos on several devices at the same time. It has a 256Mb flash memory and 512 Mb RAM. It provides one WAN port and 8 LAN Gigabit ports for Ethernet connectivity. It is possible to connect the 4th LAN port to the WAN port to obtain a 2Gbps connection, but only few people will actually need that. It comes with a lifetime of AiProtection system which keeps your router from getting viruses. You can use Alexa on this device. It also comes with an app that allows you to control it from your phone, including rebooting and parental control. This app is compatible with Android and Apple devices. 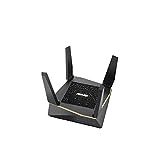 This WiFi 6 compatible device boasts great performance and reliability. It is not just fast, but it can also transmit data over a wide range. It can comfortably transmit internet to multiple devices in a large multi-storey house. The thing about it is that it comes as a set of 2, one being a router and the other a satellite.

It runs on a 1.8GHz processor and has three transmission speeds owing to its bandwidths. It has a 400Mbps speed at 2.4GHz, 867Mbps at 5GHz and a top speed of 4804Mbps at 5GHz. It has a 256Mb flash memory and a 512Mb RAM which supports its functions.

This router has one WAN port, and 4 Gigabit ports for Ethernet connection. It is compatible with Alexa and also comes with a lifetime of AiProtection which protects it from viruses. If you are a parent that likes to take control of the content consumed by your children, you are going to love the fact that this device comes with a parental control feature.

The Asus RT-AX92U ax6100 is clearly the winning device because it supports tri-band technology and boasts faster internet speeds. It also comes as a pair of two devices, with a router and a satellite. It is also a tri-band device which gives it quite the advantage over the Asus RT-AX88U ax6000 router.

Yes, it does. You can be able to control it from your phone.

Yes, this router is able to adequately support gaming.