In this modern tech-age, choosing the best Wi-Fi router is rather important. Linksys Velop Tri Band and Linksys Velop Dual Band are two of the most reputable routers in the market- with the latter winning out due to its recent additions.

For pros and amateurs alike, finding the most fitting Wi-Fi system can be quite the chore at times. For instance, Linksys Velop Tri Band and Linksys Velop Dual Band have many quality features in common. They come with the same chipset, Ethernet ports and quad-core processor. To even add to their good name in the market, Linksys Velop units are also sold in Apple stores. They are the first routers that are not Apple-branded to be sold in these shops.

To find which between these two is ideal for you, this article is an analysis of these well-reviewed products. It compares them according to their speeds, capacity and overall design. One stark difference between them is the size of their nodes with the Linksys Velop Dual Band being quite shorter than the Linksys Velop Tri Band.

Both Linksys Velop Tri and Dual Band are designed as mesh systems that entail using extra nodes to deliver better performance. For the Linksys Velop Dual Band, it comes in three units that are designed in a modern, all white look. Their modern, square design is almost tower-like standing at slightly less than six inches tall. The upper part also has well-fitted cents that keep the nodes cool at all times. They also have LED lights that alert you on the status of the device throughout the setting up process. You can also know of the status of each node by knowing what each light means. This is a plus as it makes troubleshooting way easier.

They also have the powerful future proof design. This works across board for all Linksys Velop nodes. To add, some Dual bands can be wall mounted making them a good fit for a wide range of people. Their cables are also effectively managed so as to not be an eye-sore or cause of tripping accidents.

On the flipside, Linksys Velop Tri Band has an ultra-modern look and does not compromise on its performance settings. It offers reliable streaming for intensive programs as well.

To add, they both offer MU-MIMO which ensures that both these devices work better on data delivery and other operations. They are also strikingly similar in terms of their Bluetooth connectivity, processor and ports. They each have Bluetooth 4.0, 716MHz quad-processors, and two gigabit Ethernets per node.

Both Linksys Velop Tri-Band and Linksys Velop Dual-Band routers support the 802.11ac Wave 2 which is the latest network protocol. They also support later standards but these might be phased out later on.

Linksys Velop Tri Band is adequate for its coverage features. It offers steady and fast connection for up to 5,000 square feet in a multi-story house that has more than 5 bedrooms. It does this by easily connecting to your existing modem that could be from any internet service provider. Its two antennas and Beamforming+ technology also ensures better signal coverage for other areas like the outdoors and patios. The Velop Tri band can therefore offer coverage of up to 6,000 square feet as well.

Linksys Velop Dual Band wins out on coverage as it can cover more than 4 bedrooms over 4,500 square feet. If you have a large, multi-story house, this system is equipped to offer connection without unnecessary dead zones. For particularly long and narrow houses, Linksys Velop Dual Band delivers quality performance.

The Wi-Fi speeds you get to experience with either of these vary with the product. Generally, a Velop Dual Band can deliver up to (867Mbps+400Mbps) per node.

For Velop Tri Band, and in particular AC2200, it can deliver speeds of up to (867Mbps+867Mbps+400Mbps) per node. This comes in handy for resource intensive tasks like 4K streaming and online gaming of latest releases.

As already stated, both dual-band and tri-band Velops offer decent coverage throughout your home. However, if you have a large home and you want coverage from your attic to the basement, you can consider going for a bigger pack. Both tri-band and dual-band Velop come in single and two-packs. The additional nodes can come in handy if you live in a large house as well. The double-pack dual-band, for instance, is better suited to handle many users that use resource intense tasks. Online gaming and 4K streaming is much more seamless with a two-pack tri-band Velop as well.

Both dual-band and tri-band Velop offer the same Linksys app. Beyond making the installing process easy, they also come in handy later on. For instance, you can do device prioritization through the app. Parental controls can also be easily accessed here in case you want to set limits for your children online. You can also block websites that you do not want any device to connect using the network. Finally, this app allows you to run speed tests so as to know the status of your connection throughout. 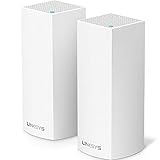 With speeds of (867+867+400) Mbps per node, Linksys Velop Tri Band is one of the fastest mesh systems available in the market. It has other good qualities as well. First, it provides wide enough coverage for a multi-story home with up to 5 bedrooms. It can cover up to 4,000 square feet without signal degradation. In terms of its dimensions, it weighs 5.05lbs and is 3.1 x 6.2 x 7.3 inches.

Secondly, Velop Tri Band offers fast speeds that are also stable enough for 4K streaming and online gaming even with multiple devices connected at the same time. It is also compatible all kinds of modems and internet service providers.

To add, there is the Linksys app that makes setting up all your devices all the easier. Within minutes, you can have all your devices connected to the Wi-Fi system. In case you had a modem, Velop tri band is also able to connect with it. It has wide compatibility with all kinds of internet service providers.

One of the drawbacks of this product is that it sometimes lags in re-establishing a connection after power outages. It might need a restart. 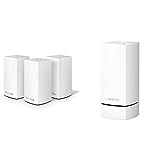 Offering coverage of 4,500 square feet for multi-story houses with more than 5 bedrooms, Linksys Velop Dual Band is a quality mesh system. It also covers the patio if you have. This is a crucial aspect as people often resort to multiple nodes so as to get rid of dead zones where the Wi-Fi signal would totally be degraded. For ranch style homes, or rather those that have a narrow design, the Velop Dual Band delivers. It MU-MIMO technology (multiple-user, multiple-input, multiple-output) also ensures maximum speeds even when multiple devices are connected to the system at the same time.

Another quality feature of this Velop Dual Band is its general, modern outlook. It primarily comes in white with multiple units that can be placed at your points of convenience. While they are quite lanky, they easily blend in with all kinds of spaces. They can also be mounted on the wall if you so wish.

To add, it is compatible with all kinds of modems, routers and internet service provider plans. The powerful Future Proof system also enhances the efficiency of this product. The installation process is streamline and quick through the Linksys app.

Finally, the dual-band Velop is often classed as AC3900 when you take into account the speeds of all the three nodes. If only one node is used at a time, the speeds you receive with the dual band akin that of AC1300 with speeds of 400Mbps for the 2.4GHz band and 867Mbps on the 5GHz band.

Like all other products, Velop Dual Band has its own imperfections. For example, it is sometimes underwhelming for people with large homes or office areas. To add, it is quite weighty and might not be a good fit for someone who is looking for a mesh system that is unnoticeable.

Both Linksys Velop Tri Band and Dual Band are quality products. They have the same chipset platform and quad-core processor. They also have their own subtle differences like the speeds that you get to experience with each. It is important to ultimately consider the speeds you receive from your internet service provider. For a Velop Tri Band to deliver its best performance; it requires plans that provide up to 300Mbps and for the Velop Dual Band those that deliver at least 100Mbps.If your internet is already slow to begin with, splurging on a Velop Tri Band might be too excessive.

Also keep in mind that both Velop Dual and Velop Tri band systems can come in a single or double pack. If you have a larger house or office space, consider going for the two-pack so that everyone experiences fast speeds even when many devices are connected.

Another point to also remember is that no matter your internet service provider plan, you ought to go for Linksys Velop Tri-Band if you have a large home. If you also have a large family with many connected devices, the extra band proves important to handle additional traffic.

However, keep in mind that you can have both the dual band and tri band nodes if it becomes too hard to settle for one. This will only result in an even better wireless system that works seamlessly.

These two systems can be seamlessly used as one set-up. This will ensure more efficient data transfer, wider coverage and overall reliability. If you have a large space and many potential users, consider combining these nodes as they are completely interchangeable.

If you require fast speeds with multiple connected devices, yes. For instance, a single 5GHz band can be easily overwhelmed if many people are streaming HD movies and playing intense online games.