This three piece router set forms an incredibly powerful mesh system that covers a massive home with high speed internet. This is not, however, its only impressive characteristic. Here is a detailed review.

When I decided to get my home connected to the internet, I bought a device from one of the leading tech giants globally that I supposed would do a great job at delivering high speeds over a wide range. However, I was disappointed a good deal, especially since there were massive dead zones all over my home. After doing my research, I came across the Linksys Velop AC3900, and let’s just say I can surf and play games in my basement if I wanted to. 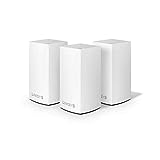 The Linksys Velop AC3900 sets itself apart from other regular routers since it is a mesh router that bears the ability to cover expansive spaces that span up to 4,500 square feet without dead zones and lag. So, really, what is a mesh router? A mesh router often comes as a set of two or three hubs (units). One of them works as the main router while the others work as satellite devices whose main function is to enhance internet transmission from strategic points in the home. They form a network ‘mesh’ that covers all rooms on all levels of the home.

The Linksys Velop AC3000 comes as a set of three devices that work to create a strong network in the home. The device operates within the 802.11ac standard which makes it a Wi-Fi 5 router. The fact that it is backward compatible adds to its practicality and versatility. The 802.11ac standard bears the capacity to support some of the fastest and most reliable internet speeds currently. Additionally, this router is made to be compatible with all available Internet Service Providers and will, therefore, work with just about all types of modems.

When it comes to internet distribution, the Linksys Velop AC3900 depends on 3 internal antennas that work to boost the speed and range of transmission. This characteristic also ensures that the mesh system created is strong and widely spread. You are going to like that this device is made to be future proof. It is a device that self-updates to make sure that it remains compatible with all future technologies as they continue to improve.

Finally, the Linksys Velop AC3900 is made with your surroundings and home décor in mind. It features a beautiful build that works well with most home environments.

The Linksys Velop AC3900 is a beautiful router that has a unique but pleasantly simple design that goes along with just about any form of home décor. It bears a cuboidal shape and assumes a vertical orientation when set up. You will notice that it has a flat base and large footprint which makes installation really easy. This characteristic also adds to its stability even when set up on high surfaces.

Measuring 5.6 inches high by 3.1 inches long by 3.1 inches deep, this device is created to fit in small spaces and can, therefore, be installed even between books on a shelf. The Linksys Velop AC3900 is covered using rigid plastic that results in durability even though the device is ideally not meant to be moved around much.

Unlike a number of routers in the market, this device’s antennas are located in the inside, an aspect that adds to its compact physique. They are, however, quite strong and make for excellent signal speed and range booters within the whole home. With these three antennas, you will not be experiencing any dead zones or lag when you are connected to the internet.

On close inspection, you will notice that this device comes with a completely closed off cover that has no holes. It is expected that it would experience issues with overheating, but the Linksys Velop A3900 is built to be able to sustain lengthy use without overheating, even during seasons of extreme heat.

As earlier mentioned, the Linksys Velop AC3900 is a mesh router that is developed for high speed transmission in large homes that span 4,500 square feet. It works effectively by creating a mesh system between the main router and satellite nodes. The added antennas work to enhance this connection.

For this kind of performance, the Linksys Velop AC3900 depends on a powerful and efficient 716MHz Quad Core processor. It works alongside a 256MB RAM and 256MB flash memory for optimal delivery. This characteristic adds to the router’s reliability and capacity to perform.

One of the features that makes this device perform so well is its ability to self-heal. This means that when one node is removed from the mesh system, the rest work to take its place and maintain the same speed and range of transmission even when it is not there. Additionally, all satellite nodes have dual band technology that ensures fast transmissions at all times. You will be pleased to know that you can add more satellite nodes as your internet usage increases and evolves.

To ensure you do not have to replace your router too soon, the manufacturers of the Linksys Velop AC3900 ensured that it keeps self-updating to the latest settings and configurations for optimal performance at all times.

A router is ideally meant to facilitate as many wireless connections as possible, but wired connectivity becomes necessary every so often. This is where ports come in. On the back side of the router are several ports. There is one WAN port that is charged with receiving internet from the main modem and two LAN ports which support ethernet connectivity. Through these ports, you can connect such devices as gaming consoles and smart TVs.

For easy operation, the Linksys Velop AC3900 comes with a downloadable mobile app that allows you to gain complete access through the convenience of your mobile phone. From here, you can activate and manage parental controls, manage guest networks, run speed tests and even give priority to devices that depend on higher speeds than the rest.

The Linksys Velop AC3900 makes for a great acquisition for persons who have massive homes that reach 4,500 square feet and whose family depends on high speed internet transmission most of the time. It’s great for such activities as gaming on several consoles and 4K video streaming on multiple devices at the same time.

Are there alternatives to the Linksys Velop AC3900?

Yes, there are. The current routers market has an assortment of devices that create strong and wide spread mesh systems. In place of the Linksys Velop AC3900, you can use the Google Nest Wi-Fi, Asus Lyra and the Netgear Orbi AC3000.

Verdict: So, should you buy the Linksys Velop AC3900?

You most definitely should. Aside from its ability to cover an impressively wide range, this device delivers speeds that are incredibly fast and that can facilitate intense internet activity without straining. It is also user friendly and quite easy to install.

Yes, it can. It proves great for connecting to smart home devices.