These mesh routers were developed by reputable companies for home connections. They both deliver where speed and range are concerned. So, which one of the two outperforms the other?

For many years, Asus has managed to stay relevant in the technologies market for developing superior quality yet affordable gadgets. They have an impressive range of routers, and the Asus Lyra Trio falls under the Mesh Router umbrella. Google’s Wi-Fi gadgets have not been around too long, but they have managed to create a name for themselves for developing reliable gadgets like the Google Nest Wi-Fi which also falls under the Mesh Router category. Set side by side, which one should you pick?

What are the differences between the Google Nest Wi-Fi and the Asus Lyra Trio?

Google Nest Wi-Fi vs. Asus Lyra Trio – How do they compare?

While the general outlook of a router does not always determine how it performs, a visually striking router makes for a great acquisition. At first glance, the Google Nest Wi-Fi, which usually comes as a set of three, strikes you as simple yet sophisticated. It bears a cylindrical shape and is significantly smaller than other routers of its caliber. This size comes in handy where space is limited since it can be tucked away behind books in a shelf, or set on a work station with ease. Unlike the Google Nest Wi-Fi, the Asus Lyra Trio goes all out where design is concerned. With its triangular shape and ‘handles’ that converge at the top, you may think it is a traditional fruit basket that Snow White would carry to the market. Just like the Google Nest Wi-Fi, this router is quite small, a characteristic that makes it easy to install.

The Google Nest Wi-Fi features a more beautiful and composed look than the Asus Lyra Trio, making it the better router.

These two characteristics form about 90% of the reasons we pick a particular router. The best looking router would not mean much if it was unable to deliver great speed and coverage. With the Google Nest Wi-Fi, users are able to experience speeds that reach a cumulative 2,200 Mbps. However, this speed is mostly theoretical and is largely dependent on the service provider. Where range is concerned, the Google Nest Wi-Fi amply covers an area of 2,200 square feet. The main difference between the Asus Lyra Trio and the Google Wi-Fi comes in where range is concerned. With a significantly lower cumulative transmission speed of 1,750 Mbps, the Asus Lyra Trio covers more than twice the range of the Google Nest Wi-Fi, reaching an area of 5,400 square feet.

Even though the Asus Lyra Trio covers a much wider range, the Google Nest Wi-Fi reaches a much higher cumulative transmission speed, making it the better router.

The idea behind installing a router is to facilitate as many wireless connections as possible. However, wired connections are also sometimes necessary. For this reason, it is important that routers provide ports to accommodate wired devices. The Google Nest Wi-Fi does not, however, provide much in this front. The main router is fitted with one WAN port and one LAN port, and each satellite device comes with just one LAN port. The Asus Lyra Trio also follows suit, offering one LAN port and one WAN port on the main router, and one LAN port on each satellite device.

Both routers offer the same number of ports, placing them on equal footing in this regard. 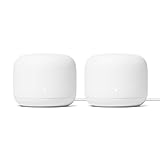 This router is one of the most preferred devices for medium sized home connections, largely for its reliability where coverage and speed are concerned. Seeing that it is a mesh router, it works to ensure that users do not experience any dead zones and unnecessary lag no matter where they are in the house. For excellence in coverage, the router is fitted with 4 internal antennas which make sure that every room on every level of the house enjoys comprehensive coverage.

Within the router is a 1.4 Quad Core processor which works together with a 512MB RAM and 512MB flash memory for ultimate performance. The Google Nest Wi-Fi works by transmitting speed from two bandwidths; a 2.4GHz and larger 5GHz band. The 2.4Ghz band delivers 450Mbps while the 5Ghz band delivers 1,733Mbps theoretical throughput.

Google has developed a downloadable app that enables users to gain full access to the router. This way, they can control it from wherever they are, accessing such features as on and off controls, parental controls and guest network management. 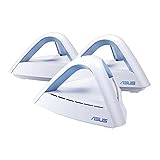 Made for transmission in large houses that have multiple levels, the Asus Lyra Trio does a stellar job where range is concerned. The fact that it is a mesh router gives it a great advantage.

As with many routers of its caliber, this device happens to be a mesh router. Often times, it comes as a set of three devices, the main one being a router and the other two acting as satellite devices. With such a set-up, it is no wonder that the Asus Lyra Trio is able to comfortably cover a 5,400 square foot range. Each device is fitted with three internal antennas that ensure comprehensive coverage and zero dead zones.

As a dual band router, it transmits internet from two bandwidths, with a 2.4GHz band delivering 450Mbps and a 5Gh band giving a 1,300Mbps throughput. With this router, controlling it is quite easy. All you have to do is download a mobile app that allows you to switch it in and off, run parental controls and speed tests, all from the comfort of your phone. For security, the Asus Lyra Trio comes with the AiProtect, a software that keeps it from being affected by cyber attacks.

Verdict: So,which one is better – The Google Nest Wi-Fi or the Asus Lyra Trio?

Each of these routers make very effective mesh systems, and they also excel in different categories, especially where speed and range are concerned. At the end of the day, a router’s point of superiority lies in its ability to deliver lightning fast speeds, whether or not it is in a small space. That said, we feel that the Google Nest Wi-Fi is a better router since it out-performs the Asus Lyra Trio with its cumulative transmission speed.

Yes, this router is backward compatible.

Yes, you can be able to issue voice commands to Alexa over this router.