These three routers are made for home transmissions, and they are all relatively new in the market. They have a number of similarities, but their differences are what piqued our interest.

Internet use and dependence across the globe has seen a major growth in the last decade, especially in the home front. For this reason, tech companies, large and small alike, have come up to supply this growing need. The Amazon Eero Pro, Google OnHub and Luma AC1300 are relatively new devices in the market, with Google being the only large tech company of the three. We decided to subject these three to a performance battle, and these were our findings.

What are the differences between the Amazon Eero, Google OnHub and Luma AC1300?

Amazon Eero Pro vs. Google OnHub vs. Luma AC1300 – How do they compare?

The Amazon Eero Pro is an incredibly simple yet beautiful device that bears resemblance to a fancy bar of soap. For starters, it has a square like shape with smooth edges and a smooth top. The Eero logo is written on the mid-bottom left of the router in elegant gold letters. Just looking at it, you would expect it to smell of vanilla and passion fruit. The Google OnHub has a completely different look. At first glance, it strikes you as a beautiful tumbler that has a fancy perforated cover. Unlike the Amazon Eero that is small, the Google OnHub stands quite tall. Looking at this router, you are not going to see any logo or any markings that would give its function away. It was designed to blend in with all forms of décor, hence the absent logo. The Luma AC1300 is the smallest of the three routers. Its shape, however, is quite fancy. With a hexagonal shape and circular LED ring in top of the router, you would think it is a gisty coaster from a space ship. Its small size and flat base make it easy to install.

Since the Google OnHub is a beautiful router that blends in with all surroundings, it is a better router than the Amazon Eero Pro and Luma AC1300 routers.

Nothing makes for a better internet experience than a router that is fast and that covers a wide range at the same time. The Amazon Eero Pro is not particularly spectacular when it comes to transmission speeds. Usually, it does a maximum theoretical throughput of 1Gbps. However, it covers an impressively wide range that spans up to 5,500 square feet.

The Google OnHub packs punch after punch, and it does not disappoint where speed and range are concerned. When placed in a large house, it is able to cover a range of 2,500 square feet clocking a maximum theoretical throughput of 1,900Mbps, almost twice as fast as the Amazon Eero Pro. Thirteen antennas ensure that signals reach all corners of the home.

Even though it is the smallest of the three, the Luma AC1300 is definitely not the weakest. It manages to transmit at higher speeds than the Amazon Eero Pro, delivering 1,300Mbps theoretical speeds and covering a range of 2,500 square feet, just like the Google OnHub.

The Google OnHub impresses with its awesome speeds and decent transmission range, and this makes it a better router than the Amazon Eero and Luma AC1300.

While it is a great feature for a router to have many ports that support ethernet connections, it is not always a guarantee that a router will have many. The Amazon Eero Proonly has 1 WAN and 1 LAN port, a characteristic that limits the number of wired connections. The Google OnHub and Luma AC1300 also follow suit in the same fashion, bearing 1 WAN and 1 LAN port each.

All three routers bear similar characteristics where ports are concerned, placing them on equal footing in this regard.

This router is an easy industry favorite since it is compact, affordable and also covers a wide range of transmission. As a Wi-Fi 5 router, however, it would be expected that it delivers higher speeds. For power, this router relies on a 700MHz Quad Core processor for optimal performance. Since it is dual band, it transmits 240Mbps from a 2.4GHz band and 600Mbps from a 5GHz band.

For great performance, this router comes with such features as beamforming, high-end encryption for data and router security and parental controls. Aside from this, the router performs regular self-updates and routine infrastructure audits. 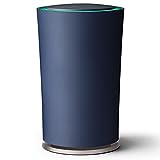 When it comes to design, this router boasts a clever and futuristic design that lets you set it anywhere in your home without worrying about blending your décor. Since it operates as a dual band device, 600Mbps is transmitted from a 2.4GHz band and 1,300Mbps is transmitted from a 5GHz band. With this router, you can be able to download a mobile app that allows full control from the comfort of your phone as long as you have an internet connection. It also boasts great security.

A hexagonal shape and LED ring at the top are what cause this router to have an intriguing look. When it comes to performance, it is able to cover a range of 2,500 square feet quite comfortably. As with other dual band routers, this router transmits 450Mbps from a 2.4GHz band and 867Mbps from a 5GHz band. Inside the router is a 1GHz Quad Core processor that gives this router great performance capacity. With this device, you will be able to access parental controls and run Alexa with ease. Security is also a main priority, and this router ensures that all your data is safe.

Verdict: So, which one is best – Amazon Eero Pro, Google OnHub or Luma AC1300?

The Google OnHub features a beautiful design, transmits internet at the highest speeds and also covers a wide range, and these features make it a better router than the Amazon Eero Pro and the Luma AC1300.

As a portable router, yes. For outside installations, no. It is not designed to be installed in outdoor spaces.

Yes,it can, but it will cover a smaller range without the satellite devices.