Are you looking to significantly boost the internet speeds and transmission range you experience within your home? The TP-Link Talon AD7200 promises extremely high speeds and it comes with a good number of performance enhancing features.

In the many years I have spent as a tech lover and enthusiast, many things have fascinated me, but few things top the list of experiences that give me glee. One of my favorite things in the world is high speed internet, and the surest way to test my patience levels is through slow internet. So, imagine my joy when I purchased the TP-Link Talon AD7200 that supports someof the fastest and most reliable internet speeds currently. Since I was overly jazzed, I decided to write down a new review to win more devotees to this device. 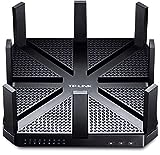 This device was built for high intensity performance in the home front, particularly where intense internet activity happens on a regular basis. Interestingly, this device operates on the 802.11ad Wi-Fi standard, and it is able to support speeds that are up to 4 times faster than the previous 802.11ac. The 802.1ad standard makes the TP-Link Talon AD7200 a Wi-Gig router. It is worth noting that this device was the very first in the world to use this standard.

With this standard, it is no wonder that this router supports speeds that peak at an impressive 7,200Mbps, a speed that will have you experiencing some of the best and most internet intense activity from the comfort of your home. Additionally, it bears the capacity to cover a wide area of transmission, reaching a range of close to 5,000 square feet.

Aside from operating across two Wi-Fi standards, the TP-Link Talon AD7200 comes as a tri-band device that does not just include the usual 2.4GHz and 5GHz bandwidths, but also the 60GHz bandwidth. This characteristic alone can be attributed to the incredibly fast transmission speeds and its ability to handle high intensity activity with such prowess. If you are a professional gamer, or if you like to stream 4K videos on a regular, you are going to love the experience on this device.

The TP-Link Talon AD7200 is an incredibly well constructed device that is not just beautiful, but also unique. For starters, its 8 external antennas make for an intriguing look that brings the beautiful Stonehenge to mind. The device bears a characteristic octagonal shape and has a wide base, making it somewhat bulky. You will notice that it assumes a horizontal orientation when installed, but this becomes something of a disadvantage, especially where space is limited.

The TP-Link Talon AD7200 measures 9.0 inches long by 9.0 inches wide by 4.23 inches deep. It is made using solid plastic material that is quite hardy but beautiful. The hard outer casing ensures that your router enjoys longevity since it prevents damage from occurring easily in case of an accident.

On the top panel of the router, there are many triangular cutouts that add to the visual appeal of the device. Additionally, they help to keep the massive router cool, particularly during intense use and also during extremely hot months. Excessive heat can be damaging to devices, and this feature goes a long way in ensuring you do not lose your device to heat.

On the front panel of the TP-Link Talon AD7200, there are 10 miniature LED lights that act as indicators for various parameters. Some of the features displayed are Power On/Off, 2.4GHz throughput, 5GHz throughput and 60GHz throughput, internet connectivity, USB connections and others. These lights are quite small and subtle, and are not visually disorienting even in the dark.

The TP-Link Talon AD7200 is a device that was created for high speed internet transmission, especially in he home front. For this reason, it comes with an array of impressive features that places it along some of the best Wi-Fi routers currently.  Perhaps the most impressive characteristic is this routers ability to support two Wi-Fi standards at a time – 802.11ac and 802.11ad. Both standards are great for enabling high speed transmissions, but the 802.11ad is the more powerful of the two.

The TP-Link Talon AD7200 delivers a combined throughput of a staggering 7,200Mbps which is likely more than what an average sized family will ever need. As a tri-band router, the speeds are distributed three ways, with each throughput being delivered from one of the three bandwidths. The smallest band, a 2.4GHz bandwidth, delivers 800Mbps speeds while a larger 5GHz band delivers speeds that reach 1,733Mbps. You will notice that most tri-band routers have a backhaul 5GHz band, but this one comes with a huge 60GH band that delivers an impressive 4,600Mbps. with such speeds, activities such as high speed gaming on multiple consoles and 4K video streaming will be a walk in the park.

For this kind of performance, the TP-Link Talon AD7200 depends on a powerful 1.4GHz Dual Core processor. It works alongside a 512MB RAM and 256MB flash memory for optimal output. This router also comes with a good number of performance enhancing features such as MU-MIMO technology, beamforming and Airtime Fairness that prevent excessive crowding over the internet.

Ports are essential for facilitating wired connectivity, and it is always an added advantage when a router comes with a significant number of ports. The TP-Link Talon does not disappoint in this regard since it is fitted with several ports. On the back panel of the device, there is one WAN port and 4 LAN ports which facilitate ethernet connections. Additionally, the router comes with 2 USB ports for your internet enabled devices.

For easy operation and control, this device comes with a mobile app that can be downloaded on your mobile device. This mobile app allows you full access to the router from wherever you are, so long as you have an internet connection. From this app, you can perform such tasks as switching the device on and off, running speed tests, managing guest networks and activating parental controls.

This router makes for a great acquisition for homes that are quite large and whose inhabitants depend on extremely fast and heavy internet. The TP-Link Talon AD7200 is great for homes where multiple high demand devices are used at the same time. If you and your family or housemates depend on high speed internet on a regular basis, this device will be great for you.

Are there alternatives to the TP-Link Talon AD7200?

Yes, there are. As an alternative to this router, you can usethe Netgear Nighthawk X10 AD7200, the Asus ROG Raptor GT AX11000 which is ideally a gaming router that supports incredibly fast internet transmission and the Netgear Orbi RBK853. These routers are great for ensuring you enjoy high speed, wide range internet speeds in your home.

Yes, you should. This device manages to facilitate some of the fastest and most reliable speeds, especially in the home front. This device will ensure that you and your family enjoy high intensity internet without any interruptions, downtime or dead zones. Its compatibility with all ISPs and modem models also adds to its exceptional performance.

You certainly can. This router supports incredibly fast speeds and can handle gaming quite well.