The search for a mesh router system can be tough especially for first timers who do not know exactly what to look for. In this article, we are going to review arguable the tow best mesh routers: Tenda Nova Mw6 Vs TP Link Deco M5, and see which is the best one for you and your home.

The TP Link Deco M5 and Tenda Nova Mw6mesh routers are two of the top mesh systems in the wireless technology market today. They are widely compared due to their similarities and many people often wonder which the better of the two is. We have all been frustrated by slow internet and know how irritating it can be, especially in your own house. If you are tired of slow internet at home especially if you have a big house where internet doesn’t get to every nook and cranny, consider investing in a WIFI mesh network system.

The Tenda Nova Mw6and TP Link Deco M5 are widely compared due to their similarities and closeness in functionality. However, they vary in a number of things as seen in the following section

What are the Differences between the Tenda Nova Mw6 and TP Link Deco M5?

TP Link Deco M5 vs Tenda Nova MW6 – How do they compare?

The search for a mesh router system comes from experiencing dead zones in the house. Always select the router with the coverage area and minimal loss of data. When it comes to TP Link Deco M5 and the Tenda Nova MW6 , they differences between them are small.

Mobile app and other support systems

Both the TP Link M5 and the Tenda Nova MW6 have mobile apps that are compatible with both Android and iOS operating systems. In fact, almost all mesh router systems feature a mobile app for installing and managing the system.

The TP Link M5 features the TP Link Deco app that is known for its simple minimalist interface and the simple step by step installation process. The app’s firmware is regularly updated with new features and functionalities that make working with the router a fun easy process. The Tenda Nova MW6 also features an app that is compatible with both android and iOS devices. The first time setup and installation is done through the app. The Tenda Nova MW6 app is easy to understand because of the user friendly interface that it comes with. All router or node units can be seen and controlled from the app. You can see each router’s IP address, the devices connected.

The exterior design of these two routers are quite different. The TP Link M5 keeps the usual minimalist simplistic design. The newer M9 is bigger than the M5 but keeps the cylindrical seashell exterior design. It is shell white in color and has a plastic body. The design is modelled to fit into your home’s interior décor without looking out of place. There’s a single light LED on top of the router that acts as a status indicator. It measures 6.0 inches in diameter with a thickness of 1.5 inches. The cylindrical design also allows mobility in that, this router can be mounted onto walls or furniture to transmit the signal further and better.

The Tenda Nova MW6 is a cube with white sharp straight edges. This means that it can only be placed vertically and makes it difficult to mount. Thanks to the smooth and lovely crystal white finish, the router feels great to the touch and generally looks quite tidy. However, its unique design is hard to miss. The Tenda Nova MW6 measures 100 x 100 x100 mm and has two Gigabit Ethernet ports per unit; 1 WAN and 1 LAN port each,and a power jack. The top of the router features an LED status indicator light. It first starts with a pink color that changed to purple hen turns off during setup. After it is connected and working smoothly, a solid blue color lights up.The antenna sends and receives signals and helps to achieve a smooth flowing working signal. However, it is important to note that more antennas doesn’t necessarily mean a better signal because other factors affect the strength of a signal. The TP Link M5 comes with four internal antennas. These antennas are omnidirectional and are irremovable. The Tenda Nova MW6 on the other hand features six irremovable antennas that are housed inside each unit. 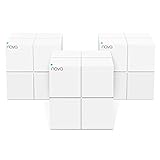 The Orbi system is not a mesh network system but can do the same functions as a mesh system such as Google Wifi. It works similarly by extending and spreading your wifi network using satellite units. The satellites are only connected to the base and not each other. The Orbi supports Wi-Fi 6 and uses a second 5 GHz band that serves as a backhaul connection. When tested in a real world setting, the Orbi is a powerful beast that has a connection speed of 300 Mbps. The speed only drops to 95% at the farthest said distance. This is quite impressive and there has been no other mesh router that comes close.

The Orbi uses a three band system that allows for high fast speeds from anywhere in the house. Pros

The TP Link Deco M5 was the first release by the Chinese company. It is a relatively powerful router with a dual band MUMIMO processor. When it comes to pricing, it is cheaper than other routers in its range. But the best feature of the M5 has to be the preinstalled security system that protects your system from hacks and harmful internet malware. It also feature self-healing property which ensures that the network continues to run well even after failure of one of the routers. This ensures there are minimal internet downtimes and is great for system.

A Deco M5 package comes with three hubs inside that should be placed at different points in the house rather than one room. One of the hubs is connected to the ISP’s modem and the rest act as secondary routers or Wi-Fi extenders. Apart from this, the M5 is a great purchase and should always be considered when searching for a mesh system.

If you’re looking for a low budget router with superb features that are almost like premium mesh systems, the Tenda Nova MW6 would be a great choice. If you want an overall great router, go for the TP Link M5 as it offers more range and has better performance

Verdict: So which is better? The TP Link Deco M5 or Tenda Nova MW6

The TP Link M5takes the lead when it comes to choosing a reliable router for your home. This is because it offers faster speeds at both long and short range. The Tenda Nova MW6 is better for smaller and average sized homes.

No. the tenda nova is an entry level mesh router and does not support Zigbee technology.

No. It comes with ventilation points located on the sides of the router.