But what do these Wi-Fi5 and 6 terms even mean?

These Wi-Fi terms are more of a hybrid, because they allow you to blanket your home in Wi-Fi without resorting to using an access point, range extender, or additional wiring to extend the signal. In the case of the Orbi AX6000 and AC3000, it is primarily through the use of mesh technology – and the biggest advantage is that they will not need separate configuration or management systems for each node.

The Netgear Orbi AX6000 is the most expensive router we have reviewed so far, and it is meant primarily for a larger-size home. It features a mobile app that eases the process of installation and management, and it still gave us a high score in the throughput tests. Despite its numerous advantages, there are things that it under delivers on: especially the glaring lack of parental controls, anti-virus and anti-malware software, device prioritization features, and USB connectivity.

What are the differences between the Orbi AX6000 and AC3000?

Similar to previous Orbi models, the AX6000 is in the form of two large-size nodes that communicate with each other through their 5GHz bands, by use of mesh technology. The resulting coverage goes up to 5,000 square feet, and each node measures 10 x 7.5 x 2.8 inches. They also in a white color, along with a status LED near their base and silver trimming.

The LED of the main node glows a solid green color when you switch it on. It also blinks red when the firmware is experiencing issues, solid amber when there is a firmware upgrade or when it is booting, and solid magenta when the connection is lost. As for the satellite node, you will see three colors on the LED – magenta when syncing has failed, amber when the connection is fair, and blue (for 3 minutes) when it establishes a solid connection to the main node.

The AC3000 has six internal antennas in contrast to the AX6000 that has eight, and can give a theoretical throughput speed of 1266 Mbps in a tri-band setup. The third band is what makes this router distinct even other AC routers, as it is considered a backhaul band that caters to communication between the satellite and router, and it is a 5GHz band that reaches speeds of 1733 Mbps.

The better pick here is the AC3000, and it is particularly because of the LED position that makes it easy to monitor.

The AX6000 is a tri-band system and a 12-stream design which supports the latest technology in Wi-Fi 6 technologies. It also has support for 4×4 MU-MIMO data streaming, beamforming, and can achieve a maximum data rate of a maximum of 1200 Mbps on the 2.4GHz band and 2400 Mbps on each of its 5GHz bands.

Its parental controls can be considered as basic, thanks to Disney Circle, and it also includes Netgear Armor that protects the network against viruses and malware.As for its web console, you can use it to manually enter URLs that you would like to block, or create access schedules that help you stay organized.

The Orbi AC3000 is similar in many ways, although it has greater levels of control in its mobile app – particularly in the advanced tab. In here, you can set up parental controls (in fact, these are stronger here than what you get in the AX6000), as well as advanced wireless settings.

Again, we find that the AC3000 is a much better choice in the control that the software provides to you, especially in the mobile app.

There are two things to keep in mind when looking at the speed scores of the Orbi AC3000: you will notice that it uses an automatic band steering system that does not allow separation of 5 and 2.4GHz bands, so the results we got are based on combined speeds, and the other is that the backhaul band results in the same speed in the satellite module as the router module.

In terms of speeds, the AX6000 has a better rating, because the router and satellite nodes still retain high speeds for each, and boost the coverage to a large extent.

If you have a router that struggles to supply a stable Wi-Fi connection even to remote areas of your home, it can be helpful to upgrade it to the Orbi AX6000. This is because it uses the latest technology of 802.11ax, which delivers generally higher throughput than the AC3000 that uses 802.11ac technology. It also includes a variety of LAN ports, a multi-gig WAN port, and the latest WPA3 encryption.

The actual performance does not differ much from other Wi-Fi 6 routers though. It is disappointing to lack important features here yet it is so expensive, which makes it better to invest in a Wi-Fi 5 system and save some money if you are not planning on using Wi-Fi 6 any time soon. 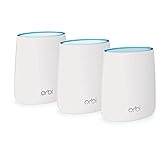 The Orbi AC3000 is seen as one of the latest players in home Wi-Fi systems, and it has plenty in common with other high-functioning routers. Like the AX6000, it uses a mesh system that consist of one router and satellite routers (can be one or several), with an easy installation mechanism.

They do not come at a cheap price though, which can be discouraging if you are on a budget. With that in mind, the Orbi AC3000 aims to give you the best throughput speeds and plenty of value for money. This is particularly through the use of MU-MIMO data streaming and management options. The thing we do not like though is the USB 2.0 port, which does not work efficiently.

There are plenty of Wi-Fi systems that give an easy alternative to more complex solutions of router/extender types. In light of this, we see that the Orbi AC3000 is the best choice between the two, as both its router and satellite modes have high scores on the speed tests. It does not have the high speeds to the extent of AX6000, but it is a worthwhile investment because of its support of MU-MIMO technology.

Does the Orbi AC3000 work well with att internet?

Yes, the good thing is that the Orbi is generally versatile enough to work with any ISP. The only thing is that you need to have proper equipment that can provide the Orbi with an Ethernet connection.

Yes, it does. All Orbi devices support the Wi-Fi Multimedia QoS that places priority on video and voice traffic over Wi-Fi links.