Do you have a massive home that requires high speed internet transmission? The Asus Lyra and Netgear Orbi are high performance devices that are specially built for excellence in expansive spaces.

For a good number of years, Asus and Netgear, both multi-national organizations, have been on the front line in the production of high-performance devices. They hold large shares of the market, and they continue to dominate where quality is concerned. The Asus Lyra and Netgear Orbi AX6000 are two router devices from each of these companies, and they boast remarkable speed and range. So, which one of the twomakes a better router for home use? The below table gives a brief overview of their characteristics.

What are the differences between the Asus Lyra and Netgear Orbi AX6000?

While a good majority of people have a preference for routers that have futuristic designs, a good number of them like to keep it simple. When it comes to physical design, the Asus Lyra and Netgear Orbi exude simplicity and elegance. The Asus Lyra comes as a round disc-like device with tiny LED lights on top. Since it is a somewhat compact router, it is pretty easy to install and can be set on a wall, ceiling or flat surface such as a table top. On the contrary, the Netgear Orbi AX6000 is a significantly larger device that stands tall and robust. It does not need mounting on a wall and will sit on just about any flat surface on which you set it. Large as it may look, this router bears a good deal of elegance, hiding within it its performance capabilities.

While beauty is a matter of personal preference, the Asus Lyra’s compact shape makes it easy to install, and its small LED lights make for a more interesting look. These factors make it the better router.

It is worth noting that both of these router brands are mesh devices. They often come with satellite devices with which they are connected for boosted range and transmission speed. This factor makes them excellent routers for large homes. The Asus Lyra often times comes as a pack of three. Each device is fitted with 7 internal antennas that ensure minimal down time and zero dead zones no matter where you are in the house. You will be able to experience a combined transmission speed of 2,134Mbps.

The Netgear Orbi AX6000 is a Wi-Fi 6 router which runs on the 802.11ax standard. Also a mesh router, it comes as a set of two devices with one being the main router and the other acting as a satellite device. Each one has 8 powerful antennas that ensure complete coverage throughout the house at all times. With this router, you will achieve speeds that reach a whooping 6000Mbps.

The Netgear Orbi AX6000 stands out as the better router since it has more antennas and also transmits at incredibly high speeds when compared to the Asus Lyra.

It is always an added bonus when the device you choose is user friendly. Being that the manufacturers of these devices are veterans in the business, it is no wonder that they have ensured that human-device interaction is as easy as can be. The Asus Lyra comes with a downloadable mobile app which allows for full control of the router from wherever you are so long as you are connected to the internet. You can make physical connections via 1 WAN and 1 LAN port present on the underside of the router. 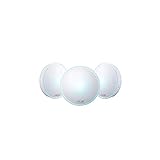 With its 5.9 x 5.9 x 1.94 inches dimensions, this router becomes one of the most compact long-range transmission devices. Its impressive transmission speeds are made possible by a 717MHz Quad Core processor and 256MB RAM.

Aside from awesome speeds, this router also boasts versatility. You can stream 4K videos across multiple devices at a time, and do intense gaming on multiple consoles. This router also guarantees top security for your information since it comes with AiProtect, a software that keeps possible cyber-attacks from affecting it. 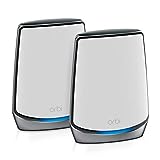 The Netgear Orbi AX6000 is arguably one of the most reliable home routers from Netgear at the moment. It combines a sophisticated yet simple design, magnificent speeds and impressive range. It measures 10 x 7.5 x 2.8 inches which makes it considerably large. Much like the Asus Lyra, the Netgear Orbi is a mesh router whose transmission range gains a significant increase from the satellite devices.

Like most devices of its distinction, this router is a tri-band device which transmits from three bandwidths. Each band transmits a separate speed with the lowest being 1,200Mbps from a 2.4GHz band and the other 5GHz bandwidths delivering 2,400Mbps speeds. These impressive speeds are as a result of a powerful 2.2GHz Quad Core processor and 1GB RAM.

Security is of top most importance with this router, and for this reason, it comes with NETGEAR Armor which ensures the safety of your information. The Netgear Orbi AX6000 also supports the use of such devices as Google Assistant and Alexa. You can also connect as many as 60 devices to this router at a go, and you can be certain that you will not experience lag or dead zones.

Verdict: So, which one is better – Asus Lyra or Netgear Orbi AX6000?

Following our in-depth research, it goes without saying that the Netgear Orbi AX6000 checks all boxes that pertain to an excellent router. It has a sleek design, has amazing range, transmits at lightning fast speeds, comes with many ports and has NETGEAR Armor. These aspects easily make it a better router than the Asus Lyra.

Yes, you can set up and manage guest networks on this router.